When it comes to what is a "Legitimate" piece of memorabilia the answer might be different depending on a lot of different factors. Generally speaking in the sportscard and memorabilia industry, legitimate means a licensed issue from a manufacturer legally entitled to create the item by virtue of contractual agreements with the league and probably with the players association, or the retired players in cases where the players association no longer represents the athlete.

But formal licensing was only established in an organized fashion in the CFL from the latter sixties, influenced by the successful NFL merchandising model, and that leaves a couple of decades prior to that where almost all items that were created would normally be considered legitimate even if not officially sanctioned. Topps & OPC trading cards were licensed but many other collectibles from the fifties and sixties may not have been, or were team issued or team initiated without any formal agreements.

Of course it was very difficult prior to the development of desktop publishing capabilities in the last two decades of the twentieth century to create physical memorabilia items with text and graphics, especially in colour. As the personal computer capabilities for anybody to graphically design anything became commonplace we start to see enterprising individuals making their own collectibles and often marketing them in small scale on ebay or through their own sites.

I generally will not include these types of items in the catalogues but it doesn't hurt to have a look at some of them that I am aware of here in the blog.

Usually these are of older retired athletes and while it is normally pretty easy to spot that they are not from the era when the player was active, it may not always be completely obvious to novice collectors.

These fake buttons have 'borrowed" their images from licensed cards of the various eras:

The first two of these fake cards with the added bonus of random small denomination coins inserted into the cards are copyrighted with all rights reserved, however the chances that the athletes were paid for the use of their images is probably zero. Why 1967 would have anything to do with Sam Etcheverry as a player is a mystery.

The last card (if memory serves because I lost the back scan) is a limited edition of 50! So you better hurry up and get one as they will likely skyrocket in value soon. The back also referenced Moon's performance when he played for Winnipeg, so apparently fakers don't bother to study up the subject matter very well.

These are more along the line of fantasy cards that the creator apparently wished had existed as parts of real trading card sets.

First up we have three different colour variations (green is also available) of imaginary card number 89 in the 88 card 1958 Topps CFL set. This is a well executed card complete with Topps copyright notice, but the uniform is wrong for the year and the autographs are of course current. I doubt that rubbing a coin on the space would produce an image.

Next we have a mythical Don Maynard card as number 89 in the 88 card 1959 Topps CFL set. This is also a well executed card complete with the Topps copyright notice and it wouldn't surprise me to find out that the stats were real (but I have not verified it). But the uniform is airbrushed and is wrong because the Tiger-Cats were not wearing the striped sleeves jerseys in 1959, the only year Maynard was in the CFL. Maynard would of course go on to greatness with the N.Y. Jets and is one of many, many players who starred in the US professional leagues but also spent some time in Canada. 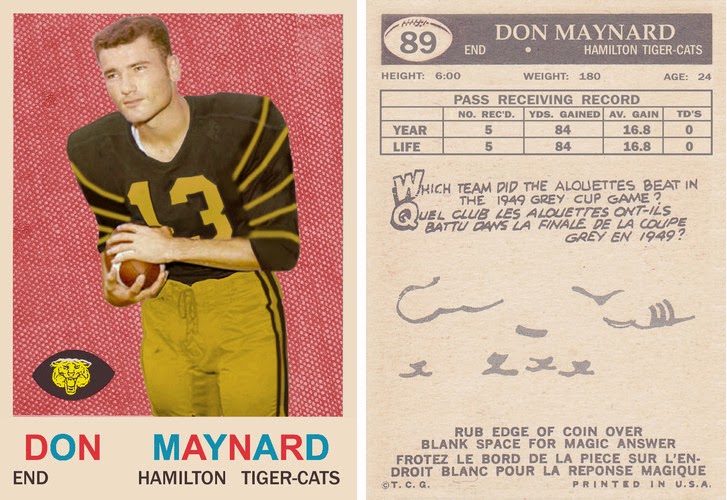 Here are two cards of George Reed in what would have been his rookie season of 1963, they are both numbered 94 (the card backs are the same) in the 88 card 1963 Topps CFL set. In this case it looks like there is an image that would appear if you were to place the red cellophane on the card back.

Finally here is an unreal Carl Weathers card as number 133 in the 132 card 1972 OPC CFL set. Carl became very popular after appearing in the Rocky movies as Apollo Creed and I believe this was probably one of the first of these types of cards produced. The image is taken from the 1972 Lions Royal Bank set and at least this creator copyrighted the card to B.O.B which one would assume was his first name. 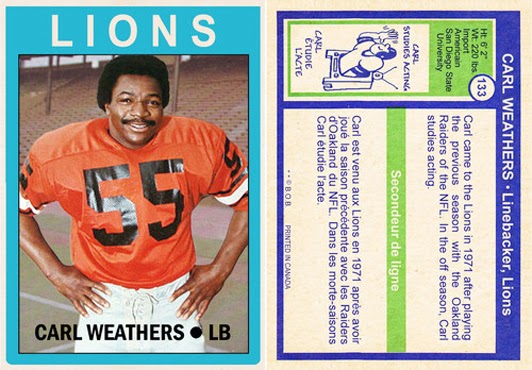 Generally don't exist to my knowledge because to forge an existing physical item convincingly takes a lot skill and effort (even with today's tools) and the vast majority of CFL cards do not have anywhere near the value that would make it worthwhile for somebody to do that. However be aware that unethical actions taken to increase a card's value (trimming, cleaning, pressing, etc.) can certainly be encountered for the high value cards in the CFL hobby that warrant it.

I'll probably revisit this topic in a future post to highlight more faked or fabricated items.

Email ThisBlogThis!Share to TwitterShare to FacebookShare to Pinterest
Labels: Fakes