Who were these guys?

All Canadian football fans are familiar with the nine classic franchises that were (and with the exception of the Ottawa Rough Riders) still are, the essence of the professional game in this country. These franchises' well known vintage logos adorn the top of this blog. Besides these nine teams that represent decades of equilibrium, you have the modern oddities of the Montreal Concordes in the eighties, the two Ottawa replacement teams in this century and the ill-fated American teams of the nineties.

But if you spend anytime looking at Canadian football material on ebay and other sports auction sites, in particular when you venture back prior to 1950, you will soon come across what may be strangely unfamiliar teams that often competed against members of the classic franchise group, or were the precursors to those well known teams. 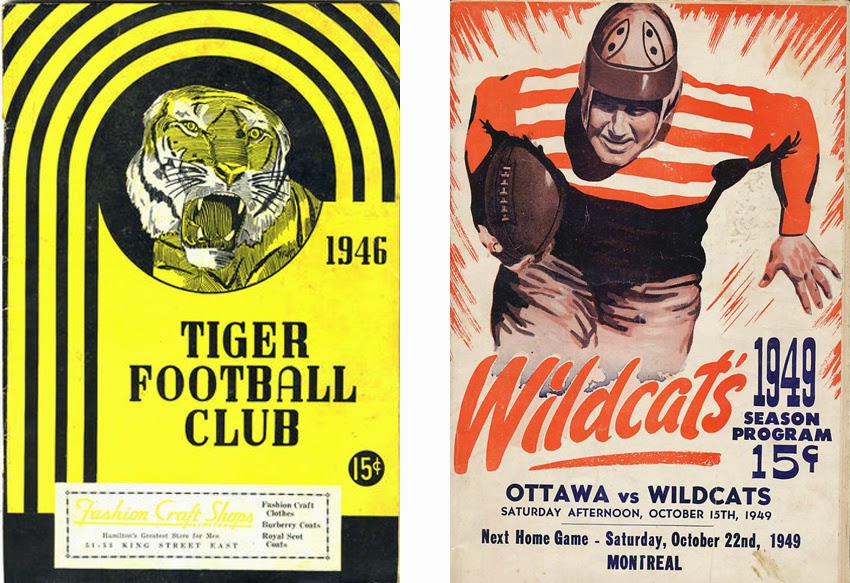 Prior to 1950 Hamilton had two teams (that in 1950 merged to form the Tiger-Cats), the Tigers and the Wildcats who competed in two different unions:

the Interprovincial Rugby Football Union or I.R.F.U. traditionally known as the Big Four, which was originally organized in 1907, and would go on to eventually form the Eastern Division of the CFL with the classic teams (Argonauts, Alouettes, Tiger-Cats and Rough Riders), and

the Ontario Rugby Football Union or O.R.F.U. which was the older league organized in 1883. This league was home to many teams that won Dominion Championships prior to 1909 and Grey Cup Championships from 1909 onward. But eventually this league would lose the capability to be competitive with the Big Four clubs and the teams from the Western Interprovincial Football Union or W.I.F.U. 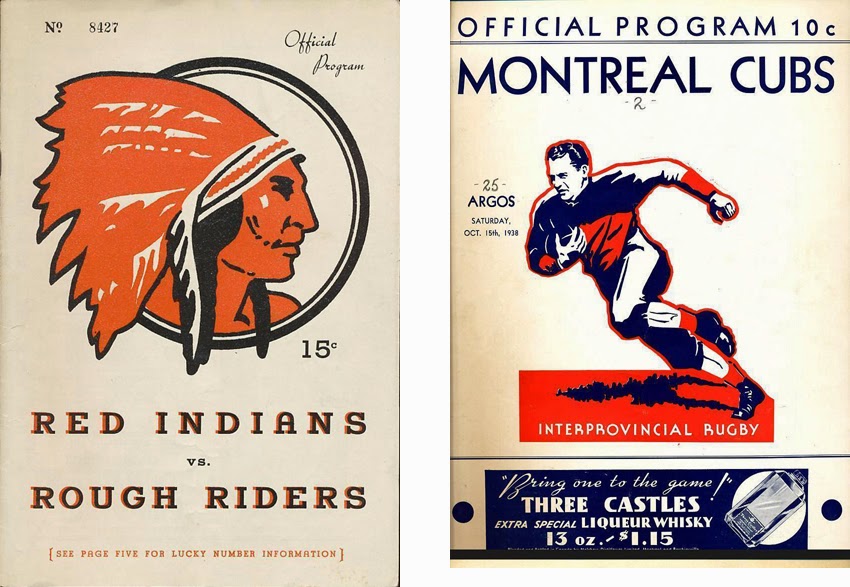 The Argonauts, Tigers and Rough Riders all were formed in the latter stages of the 19th century, competed for a time in the O.R.F.U. and eventually landed in the I.R.F.U.  Montreal's early franchises were members of the Quebec Rugby Football Union or Q.R.F.U. until they also joined the I.R.F.U. Montreal had the most variability in their pre-war teams (as the Alouettes were a post WWII entity), illustrated above are two of their clubs that played in the I.R.F.U. in the thirties. 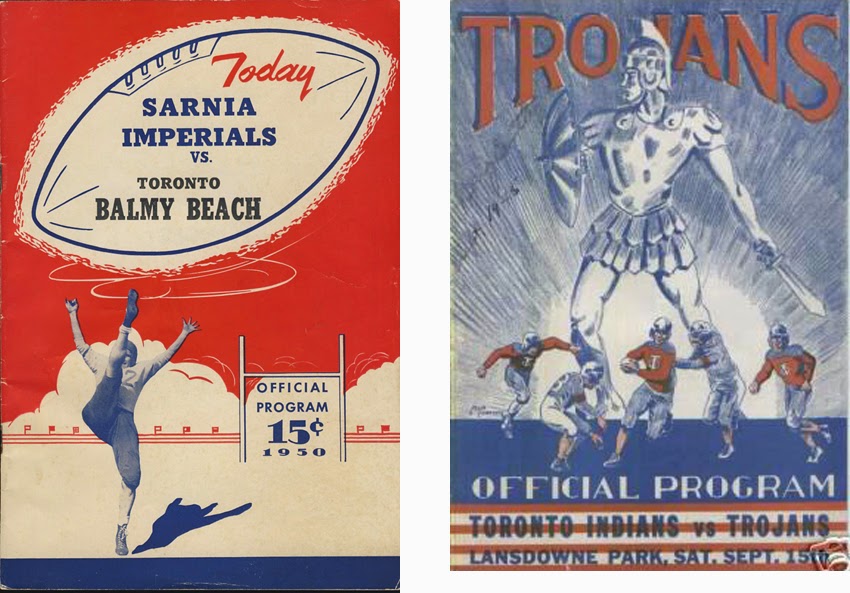 The O.R.F.U. teams are much less well known today, although some had considerable success as both the Sarnia Imperials and Toronto Balmy Beach were Grey Cup champions. Other teams such as the Ottawa Trojans were short lived and have been pretty much completely forgotten. While the level of play in the O.R.F.U. was surpassed by that of the I.R.F.U. and W.I.F.U. teams after WWII, it is worth noting that players such as Cookie Gilchrist and Frank Filchock played some time in that league so it might have been higher caliber action than generally credited. 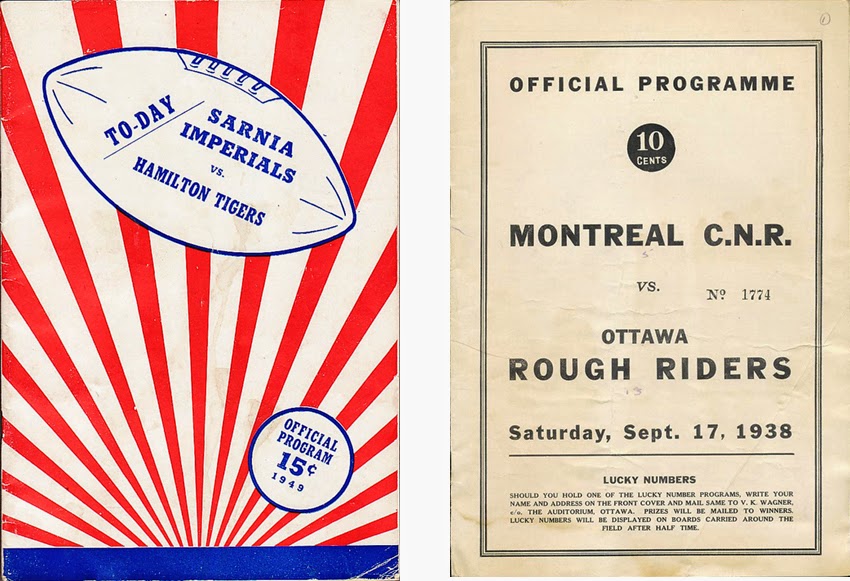 Membership in the different unions was somewhat fluid with teams sometimes migrating back and forth from season to season and inter-league games happening as part of pre-season and playoff contests. During World War II the leagues were in flux as teams were restructured to provide athletic recreation for many of the players who had signed up for active or reserve service. The programs below are from this time period. 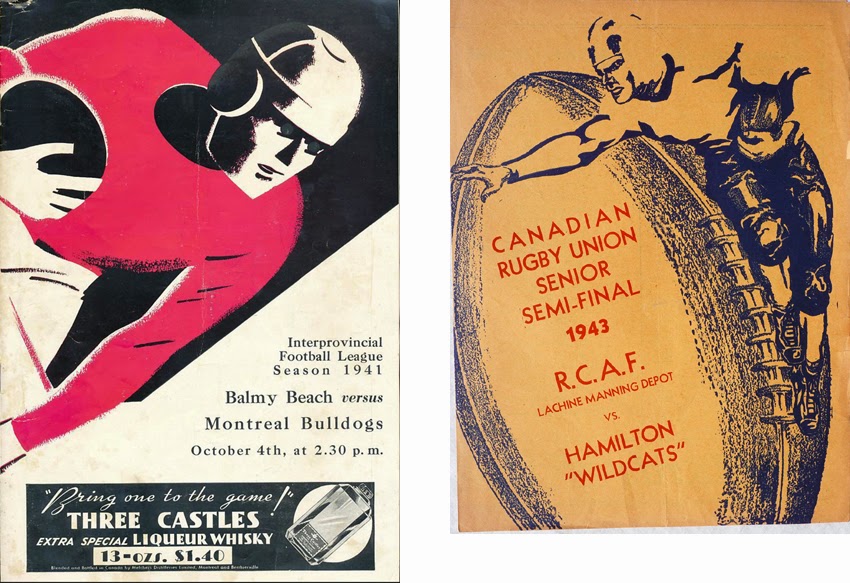 The same reconfiguration of the teams during the war years also happened out west. 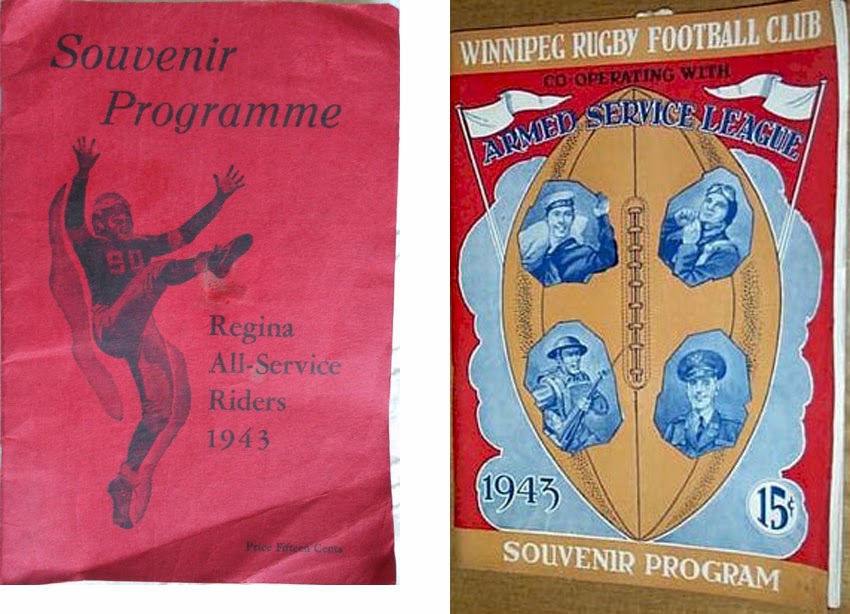 Outside of the war period the situation out west was somewhat more stable as there were fewer teams and many of them used the same nickname for long periods of time. Occasionally the western teams were matched up against some of the O.R.F.U. clubs in playoffs until after 1954 when the O.R.F.U. stopped competing for the Grey Cup. 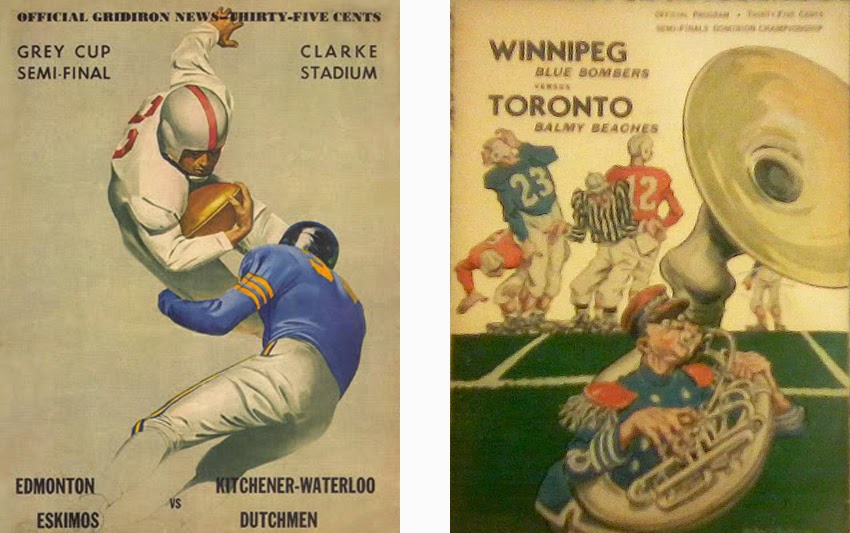 But the further back in time you look the more likely you are to come across unfamiliar franchise names in the west as well. Since the number of competing football unions as well as the general population were far less out west, these programs are usually scarcer than their eastern counterparts. 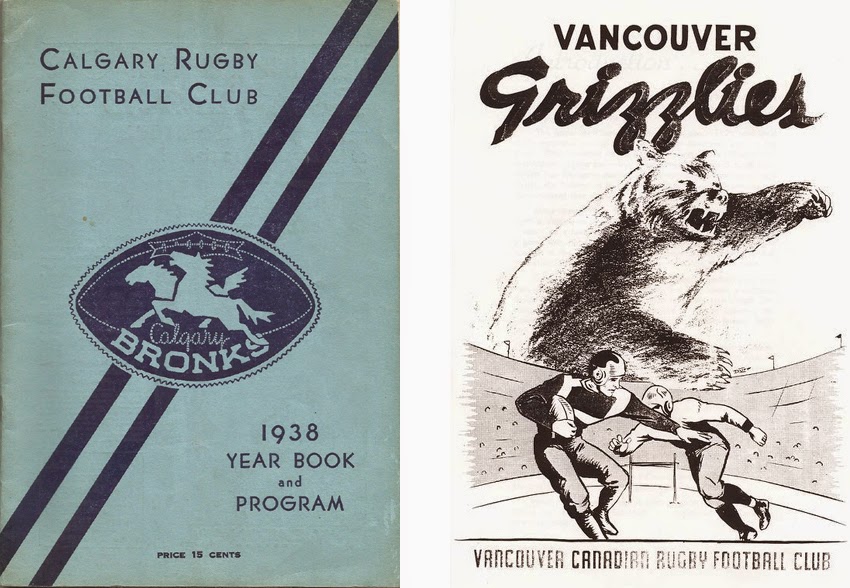 What seems to most modern fans to have been a stable group of unchanging teams over the long history of Canadian football is actually far from the reality. The story of the development of the sport in Canada is a complex patchwork quilt of competing unions, teams, levels of play and the progressive evolution from amateur to professional status. When you layer in the collegiate teams that were embedded in many of the unions from time to time as well as the different levels of senior, intermediate and junior competition there is a wealth of material to collect, research and preserve across the decades and across the geographical expanse of this country's sporting landscape history.