Well as a lifelong Calgary fan, the title of this blog post is an absolutely heinous lie. But one thing that I actually do love about the Eskimos is the range and uniqueness of some of their vintage memorabilia. Not sure if the success that the team had with their mid-fifties dynasty is the reason but it sure seems like there were a lot of fabulous items produced by the club during that era to help popularize them with the local fans. Of course three consecutive Grey Cup Championships in 1954, 1955 & 1956 made it pretty easy for the fans to get excited about their team and want to buy novelties and souvenirs commemorating the achievements.


After struggling through their first few seasons as an expansion club from 1949, the Eskimos progressed to their first modern Grey Cup game in 1952 and that appears to be when the interesting paper place mat below was produced.

In 1954 the team again went east to the Grey Cup and the wonderful folded paper commemorative illustrated story shown below was produced to dramatize the events in a humorous way. The "Trek to the Grey Cup" recounted the teams seasonal journey and represented the players as husky sled dogs on the long run to the east through the other CFL cities. 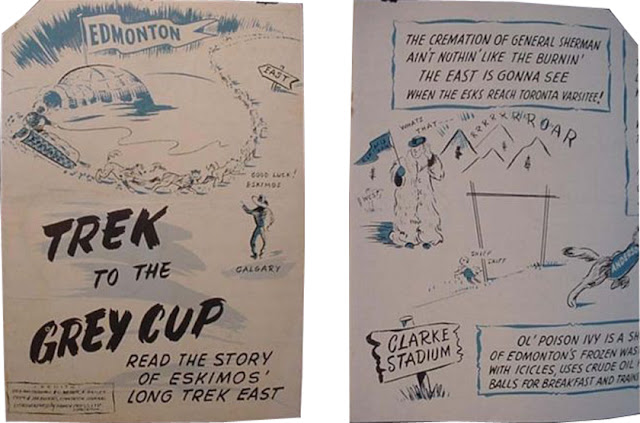 The story was obviously produced before the game took place because all of the verbiage around what will happen is in future tense. The full story is on 4 folded pages printed on both sides giving 8 different panes of cartoon drawings plus text. This particular item looks to have been partially cut on one of the top corners. 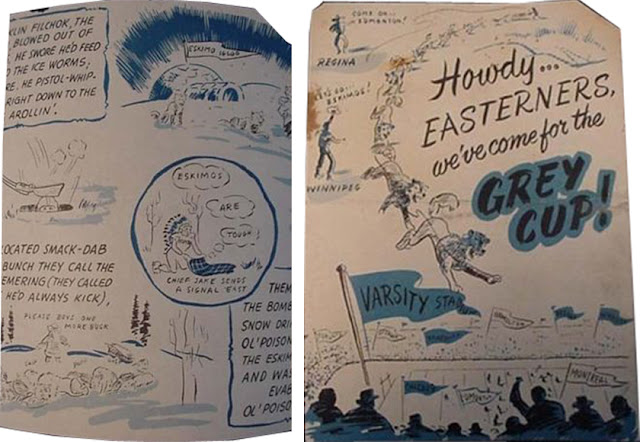 This type of oddball obscure vintage collectible is really fascinating and acquiring these sorts of historically evocative pieces will really make a CFL collection something unique and noteworthy. I can't actually think of a similar type of cartoon seasonal item produced for any other team, but some other unusual historical CFL gem is inevitably going to pop up soon to rival these.

Of course the team went on to win that 1954 Grey Cup in stunning fashion, and the 1955 championship and was on it's way to the 1956 match up when another colourful cartoon story was published to commemorate the event. 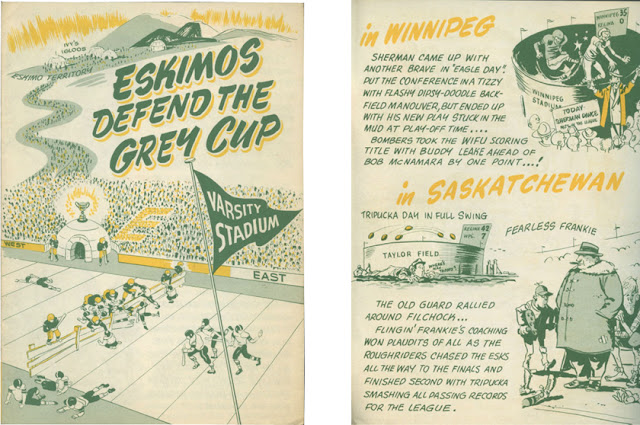 Once again the same 4 page, 8 panel format was used to predict that the Eskimos would emerge victorious, and as everybody knows they did. Both of these items recently came up on Ebay and if I recall correctly they went for between $75 and $150 USD each (actually I am not positive about those prices and in fact they might have gone significantly higher). 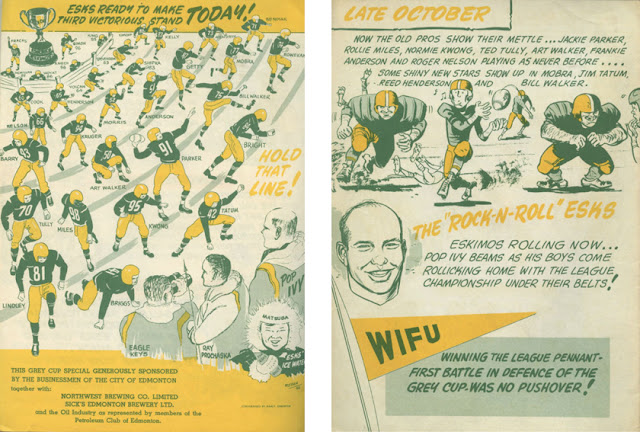 The 1956 version illustrated each of the players on the team roster as well as the coaches and even the water boy George Matsuba. Of course readers of Collecting Canadian Football Volume I will already know that Matsuba made his "rookie" appearance on the 1953 Northern Photo Edmonton Eskimo colour team postcard. Information on the product sponsors and the artist is also provided. It would seem pretty likely that a 1955 edition of these illustrated stories would also have been produced, it just hasn't surfaced yet probably.

The result of all of that on field success was reflected in the number of different Eskimo promotional products produced (besides the regular pennants, pinbacks, pins and so forth). It is reasonable to assume that more varied items can be found for the Eskimos of that era than any other team.

From car accessories to office supplies, vintage Eskimo memorabilia with the great graphics of that time period can still be found without too much difficulty in flea markets and antique malls across Alberta and beyond into the adjoining provinces. From my experience you will see considerably more Eskimo material from the fifties decade than any other team.
Posted by Andy Malycky at 23:39 No comments:

In The Game...but Without a League License - (Volume 1 Addition)

When collecting Canadian football themed material you sometimes come across a few items that aren't strictly speaking CFL items, but are still related to the sport and its history, so on that basis I will be adding a few cards from the set described below to the eventual planned update of Collecting Canadian Football Volume I.

Dr. Brian Price originally re-licensed the venerable Parkhurst name (for hockey card issues) during the early nineties of the sports card boom, and subsequently went on to form his own company called In The Game. Initially licensed by the NHLPA he was eventually forced out by Upper Deck's exclusive licensing agreement and subsequently began to market cards that were not licensed by the league or players association, but were contractually connected with the athletes themselves. You can read an interesting summary of his company's struggle at his blog. 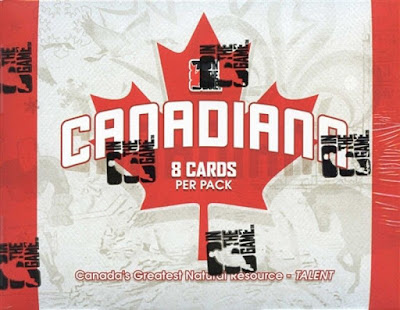 So having a lot of experience at producing this type of collectible, in 2011 the company issued a Canadiana set featuring Canadian athletes, entertainers, inventors, politicians and so forth. The set has a couple of items in it that tie into Canadian football athletes or personalities, but are not affiliated with the CFL or CFLPA in any way. 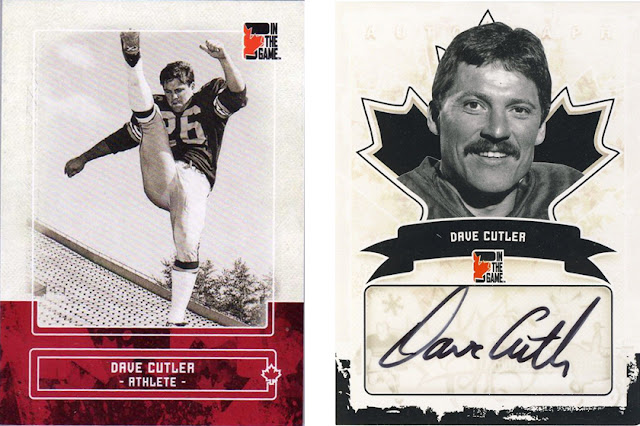 Above are pictured two of the Hall of Famer Edmonton Eskimo place kicker Dave Cutler cards from the set. Cutler appears in about five different cards and there are multitude of different limited versions of many of them, some of them one of one, so good luck collecting all of those. As you can see no team or league logos appear on any of the cards or pictures. Cutler's base card picture was taken from the Early 70's Edmonton Eskimos team issue media photo set as listed in Collecting Canadian Football Volume 2. 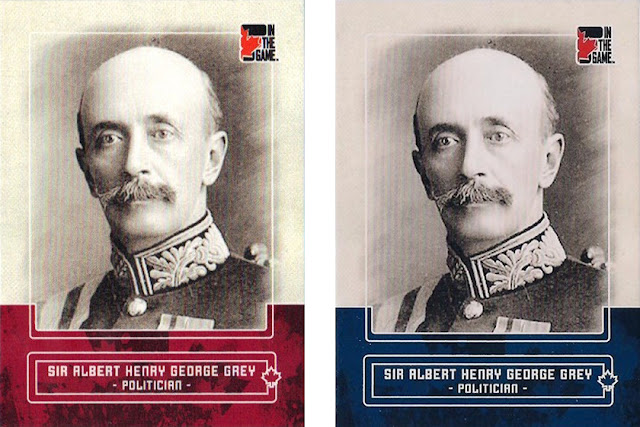 The set also includes the "Rookie" card of Canadian Governor General Earl Grey who donated support and his name to the iconic trophy for the Rugby Football Championship of Canada. Multiple chase cards here as well, naturally. 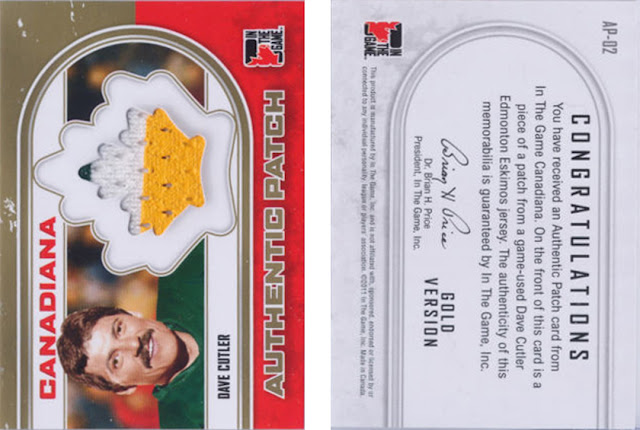 There are lots of different autograph, memorabilia and patch cards for Cutler in the set, strangely enough all of the patch cards (any person) seem to share the same distressed markings on the card borders, so this must be intentional. There is also supposedly a Russ Jackson autograph card in the set (+ chase variations) but I have not been able to find any images of any of those cards. All of the various versions and limited prints will eventually be detailed out in the Volume 1 update.

Now if you read the update provided by Dr. Price at his blog he touches on the entry of Italian sticker conglomerate Panini into the North American sports card and memorabilia industry and how it had affected his operations. I also mentioned in an older blog post how Panini's entry into the market might have affected Upper Deck's interest in producing Canadian Football League cards. Well it seems that Panini is not too concerned about borrowing the use of a player's image from a league that they do not license for memorabilia products either. They issued this unusual card of Chad Owens in their 2014 multi-sport set that is tied to a major Black Friday marketing initiative. 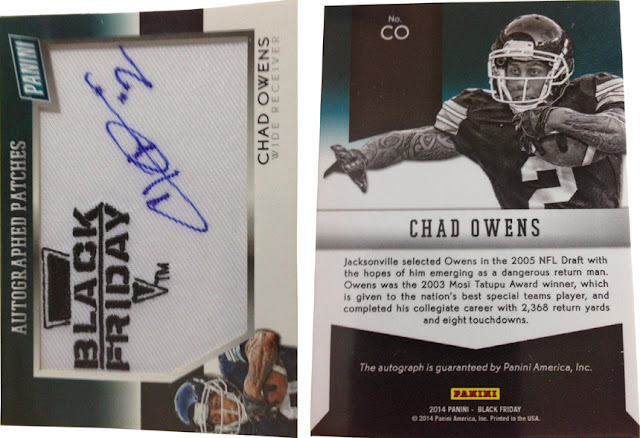 While the card is listed as a Jacksonville Jaguar issue and has the appropriate Jacksonville colour scheme, the image of Owens is clearly as an Argonaut with the helmet logo and jersey advertising patches photoshoped out. In fact this is the same image as was used on a very attractive Panini special Toronto Fall 2013 sportscard & memorabilia expo glossy photo premium (apparently unlicensed by the league or the CFLPA) that Owens and quarterback Ricky Ray (his own photo) were in attendance to sign. 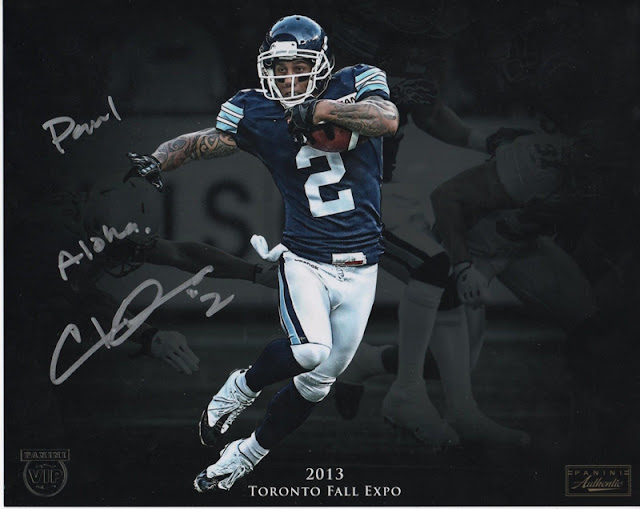 It will be interesting to see whether or not Panini expands their reach towards the CFL with any officially licensed products in the near future. CFL stickers anyone?
Posted by Andy Malycky at 20:36 No comments:

When the 1989 Saskatchewan Roughriders managed to finally win only their second Grey Cup in eighty years of operations, long suffering Rider fans were finally rewarded for their years of unflinching support. To celebrate, the players that had finally got the 23 year gorilla off of the franchises' back were featured in full page colour posters in the Regina Leader-Post. 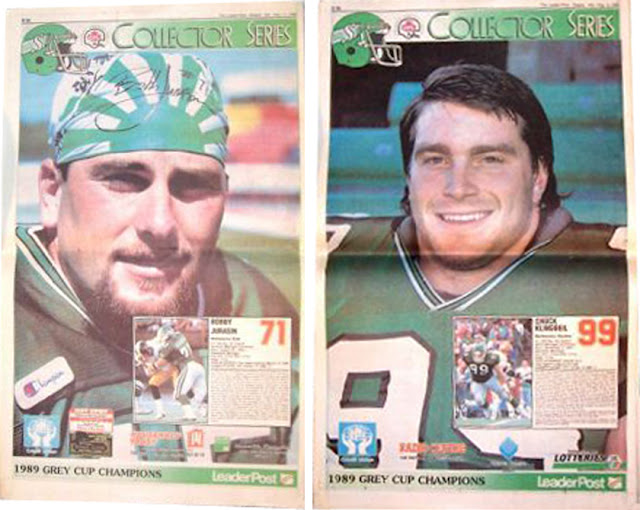 The set was written up in Collecting Canadian Football Volume 2, however only two of the posters were known to me at that time (Albert Brown & Vince Goldsmith) and they must have at least partially been issued into 1990. Each poster was of course on newsprint and would most likely have had regular newsprint content on the backs. Pictured above are Bobby Jurasin and Chuck Klingbeil versions from the newspaper.

Now newspaper posters are not every collector's cup of tea, because the paper is pretty crude, subject to acid content degradation and the image resolution is usually poor. The posters are also usually large and difficult to store. On the other hand, if you are a subscriber then they are pretty much free and are delivered to your home. If you are not a subscriber then they are generally pretty difficult to acquire precisely because they are not highly regarded and most of them get thrown out.

But if you happened to pay attention to memorabilia offerings from the Rider store, then as late as 1992 you were able to purchase a complete set of Rider "Collector Series" Posters for $5.00! As you can see below the posters were the same as what appeared in the newspaper, but on quality white poster stock (blank back) and without the newspaper name and publication date or page number at the top of the item. Unfortunately the low res scans I have of the store posters are poor and come from an eBay auction where the seller digitally altered the image with the Sample banner.


There were 24 posters in the set sold by the Rider store and if one was to troll through the Leader Post microfilms after the 1989 Grey Cup I suspect that you would find the same number of newsprint items. What's more, the posters from the store came autographed by the majority of the players (either eighteen or nineteen of them) featured on the items. As you can imagine personally autographed memorabilia items from the 1989 Rider Champions is going to be worth considerably more today than the .21 cents each poster cost originally. I think the recent eBay seller was asking around $60 per poster for the more common players in the group (but framed as well).

Here is the complete listing in no particular order: 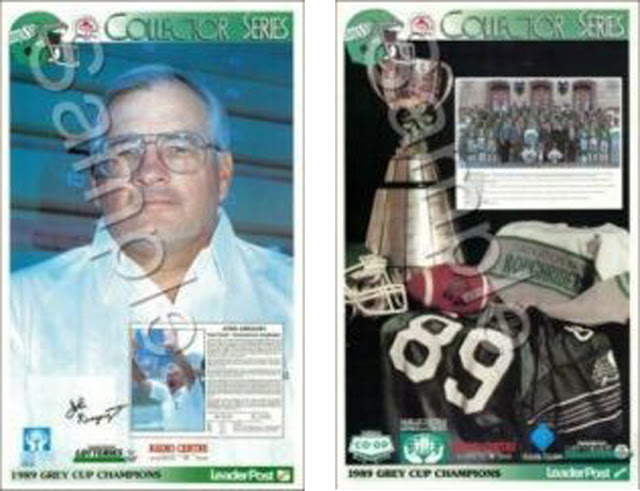 If you were savvy enough to stock up on these items 25 years ago the reward would be pretty significant monetarily as well as emotionally. Thanks to Rider fan and collector Clint Taylor for a lot of the information about the store poster set.

Posted by Andy Malycky at 15:49 No comments: