With today's internet enabled, around the clock saturation of available sports information and the proliferation of cable sports only channels, with full fledged sporting news broadcasts updated throughout the day, it is hard to imagine (or remember) what following sports was like a half-century ago. In the nineteen fifties, TV was in its infancy, most markets had only a couple of channels and local stations had limited budgets for sports reporting. The daily newspaper would allow ardent followers to read about the progress being made during training preparations for the upcoming season and radio would have been the primary outlet to listen to away games for most fans once the season was underway.

In this environment, the chance to see each year's crop of exciting new players show their capabilities under game conditions, was a pretty exciting prospect for local supporters, as well as a valuable measurement tool for the coaching staff. So the intrasquad exhibition football game, pitting one half of the training camp team roster against the other half, became a mainstay occurrence for several decades. Keep in mind that only two of the nine CFL cities had NHL teams during this time and football was therefore the dominant sport that fans in most of the cities could actually attend in person.

Once the fans were at the game they would naturally need a lineup in order to tell players apart on the two teams and to be able to attach names and numbers to those athletes that showed potential for the upcoming campaign. Hence the intra-squad program was born, usually just a couple of pages long, identifying the players and sometimes including player pictures and local advertising. As you can imagine these would have been printed in much fewer numbers than the regular programs and the survival rate was low, making for a very interesting and challenging to acquire collectible.

Since I feel I have not had a chance to focus much on Winnipeg material so far in the blog, this post will look at all of the Bomber programs that I am aware of and just illustrate a few from each of the other teams where available. The first Blue and Gold intrasquad program is from 1957 although the other pictured program whose year I don't know might be older. Khartum Temple is a Shriner's organization in Winnipeg that used to sponsor various games at Winnipeg Stadium as part of their charitable activities.


The fan that attended the 1961 Bomber intrasquad game and saved the program must have had some sort of connection to the team because there are 47 players listed in the lineup and over fifty signatures on the cover, including legendary coach Bud Grant and a who's who of Winnipeg Hall of Famers from their dynasty four cups in five years team. This item would be a stunning centerpiece of any vintage Blue Bomber memorabilia collection.

In 1962 ceramic bobbleheads came to the CFL and while they were probably not a game-day giveaway like today's sports promotions, a Bomber version did make the cover of the intrasquad program. Also pictured is the same (or close) first generation Winnipeg bobblehead. All information that is known about the myriad types and variations of CFL bobbleheads will be included in Collecting Canadian Football - Volume 3.


The mid-sixties versions of the programs in Winnipeg were fairly similar. As you can see from all of the dates, July was still pre-season as the schedule was shorter than today and the season started later.
1966 is the last image I have for Winnipeg but the Blue and Gold games with programs likely continued at least into the early seventies.


Further east in Toronto intrasquad programs can be found from at least 1959 through to 1976 meaning there might be up to 18 different editions of these hard to find gems for the Argonauts. At least one season was advertised as Joe Theismann's Blues versus Greg Barton's Whites.


In Ottawa only a span of eight years is confirmed, but it would be reasonable to conclude that additional programs outside this range were also produced. Often times the programs were sponsored by local community organizations and sometimes the games were played away from the team's normal home stadiums.


Hamilton started out with specialized programs for their intrasquad game but in 1958 they combined the intrasquad information with their regular media guide, before reverting to producing specific programs from at least 1960 onwards. Hamilton was one of the few teams to issue updated media guides in some years, so perhaps it made sense to amalgamate the intrasquad information with a particular season's early version guide.


Exactly what was going on in Montreal in 1955 is unknown, either there was more than one intrasquad game, there was more than one program for a single game, or these were the front and back covers for the same game (seems doubtful). Interesting that the team was involved in efforts to help prop up the provincial union which by this time would have been almost completely shunted aside in favor of the dominant Big Four Eastern I.R.F.U. I don't have any record of any other Montreal intrasquad program.


Back out west the Eskimos touchdown club was issuing intrasquad programs from at least 1955 through 1958 but the games themselves probably were occurring prior to 1955, possibly without a specific program. The B.C. Lions don't appear to have ever issued intrasquad programs, as I can find no mention of them in John Wirtanen's encyclopedic half-dozen books on B.C. Memorabilia and team history. Similarly I have no record of any Saskatchewan Roughrider intrasquad programs although they are known to have hosted many Green versus White intrasquad games.

Finally in Calgary no specific intrasquad game programs appear to have been produced but from 1963 to 1965 the intrasquad lineups were inserted into the team media guides on different paper stock than the rest of the guide pages.

In fact intrasquad games never disappeared completely although it would be unlikely to find a game program issued after the seventies. Many teams continue the tradition to this day but any promotional material created is of a digital nature. 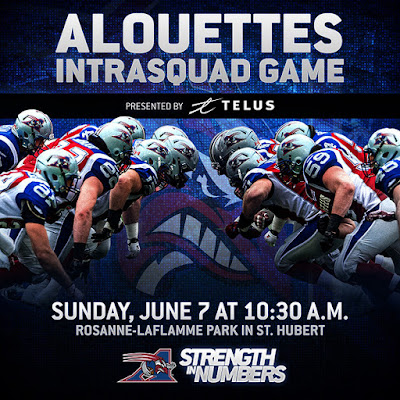