Later today, the 103rd Grey Cup Championship game will be held, and probably by the time you read this, either the Edmonton Eskimos will have ended a ten year Grey Cup drought, or the Ottawa RedBlacks will have ended the City of Ottawa's thirty nine! year Grey Cup drought in the 2nd year of the new franchise's existence. So what better time to look back on a nifty Grey Cup Party Pack that was produced in 1972 and was chock full of goodies to help take your own home Grey Cup viewing party over the top! 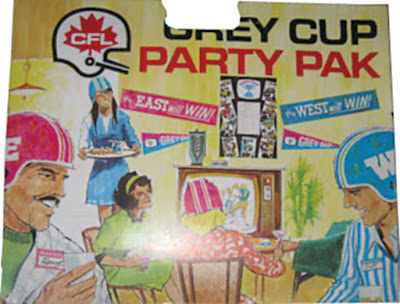 The products came in a cardboard package with great period graphics showing a Grey Cup party in full swing enhanced by the goodies in the kit. The reverse side of the package is the same image in French but the components appear to all be unilingual English. There are a couple of these kits on ebay right now and usually when they are available they tend to have most of the components intact, as it is probable that the items were either used and then discarded, or purchased and left unused for 40+ years. 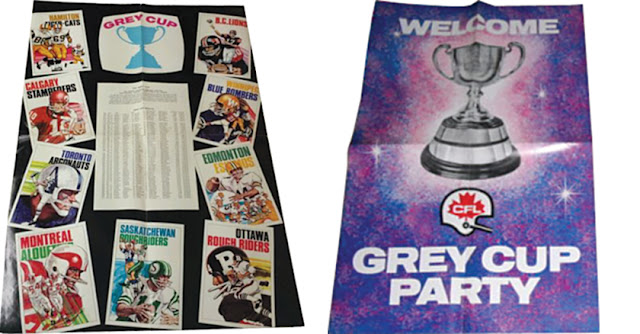 The most desirable items in the kit are two posters. The first has the very familiar 1971 CFL properties team posters reproduced in miniature around a panel of historical Grey Cup results and the second is an attractive poster with the Grey Cup and CFL logo welcoming guests to your Grey Cup party. I have seen ebay advertisements for this kit claiming there were three posters in the set, but at this point that is unconfirmed.

Next up were two paper banners (the western one in blue) prophesying victory for each geographical region and two paper generic Grey Cup pennants combining the colour schemes. Additional items that I was unable to get decent scanned images of were name tags for your guests to identify themselves with (in the same colour distinctions so you knew who they were rooting for) and coasters that I think were more generic with the Grey Cup silhouette image on them. 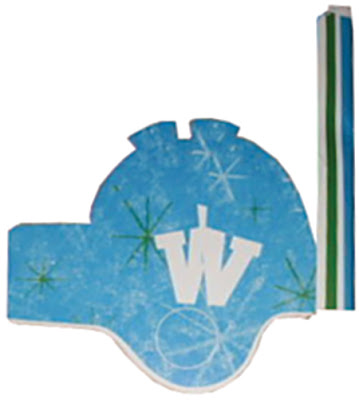 Finally each kit came with either six or eight paper helmets in West - blue or East - pink colours and a paper stripe strip to run down the top of the helmet crown. Who needs lampshades when everybody is decked out in these sweet units. The sets currently on ebay are priced somewhere between $175 and $200 US dollars each but I recall about 10 years ago seeing a set go for a couple of dollars as this is the kind of item that can sometimes fly under the radar. It is also a somewhat difficult group to catalogue because the general distinction is to group items by type, but in this case they will probably be listed as a single issue of multiple different types in the under-preparation Collecting Canadian Football Volume III - Novelties & Souvenirs. 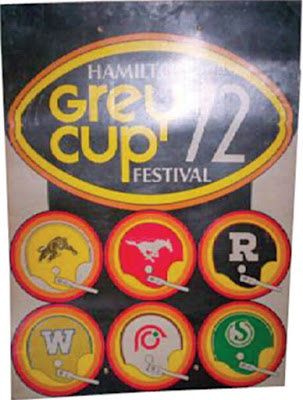 Now if you lived in Hamilton and were attending the 1972 Grey Cup in person, instead of hosting a viewing party at home, you would have enjoyed the last play of the game Ian Sunter field goal that lifted the hometown Tiger-Cats to victory over the Saskatchewan Roughriders. And perhaps on the way out of the stadium you might have been lucky enough to grab the pictured 31" X 40" hard cardboard mounted poster displayed at various festival locations. Presumably the six team helmets pictured represented the playoff participants but Calgary did not make the playoffs in 1972, and Edmonton did.

Email ThisBlogThis!Share to TwitterShare to FacebookShare to Pinterest
Labels: Seventies