The Montreal Alouettes were formed in 1946 and competed in the Interprovincial Rugby Football Union & the Eastern Conference and Eastern Division of the CFL for 36 seasons from 1946 to 1981 winning 4 Grey Cup championships over that span. The team was then bankrupted by questionable ownership and withdrew from the league before the 1982 season. They were replaced for four seasons by the Montreal Concordes before that franchise was renamed the Alouettes for a last gasp 1986 season after which they abruptly folded just before the 1987 campaign began. In 1996 the Montreal Alouettes were again resurrected as a CFL franchise in Montreal 10 years after the second iteration of the team failed by the transfer of the reigning Grey Cup champion Baltimore Stallions to the city.

In order to help re-popularize the sport with Montrealers what looks like a couple of different sets of blank backed postcard sized player items were issued, and the curious part is that in the middle of the last decade of the 20th century these items were produced in grainy black and white. 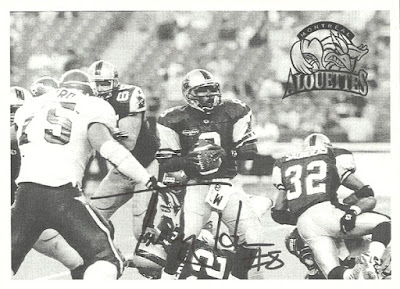 The first set had white borders around the images and varied from 7 1/4" X 5 1/4" to 5 1/2" X 8 1/2" in size. Established stars coming over to Montreal with the Stallions, quarterback Tracy Ham and running back Mike Pringle, were among those featured. 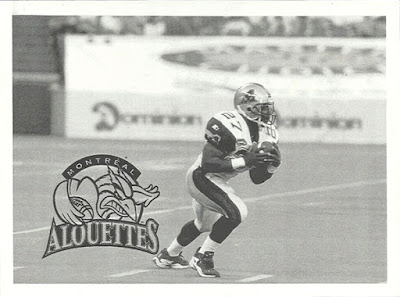 Some lesser known players such as linebacker Rahsaan Giddings as well as a group shot that probably dates from 1997 because head coach Dave Ritchie is included were also produced. 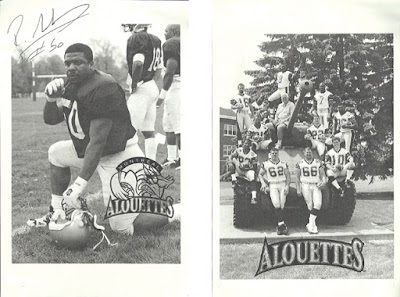 The second set has no borders and the B&W images bleed right to the edge of each card. Sizing for these cards was probably similar to the border set but might also be somewhat variable. All of these cards did not make the cut for Collecting Canadian Football - Volume 2 because at the time the book was to go to the printers I did not have sufficient information or reasonable images of the items. 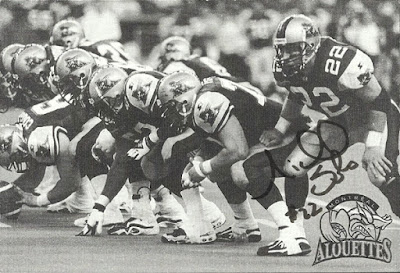 These cards are more often than not found autographed so it is possible that they were handed out at practices after which the players would have been readily available for signing. The difference in the negative white image of the logo versus the positive black image might also signify a different year of issue. 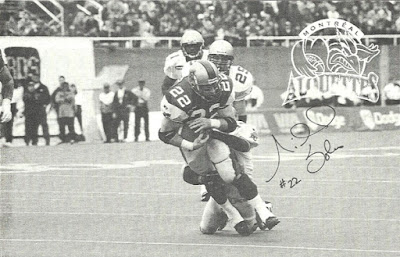 Running back Michael Soles (above) and kicker Terry Baker (below) were isolated on their cards but others show group action shots with multiple players and a cheerleader posed card also exists. 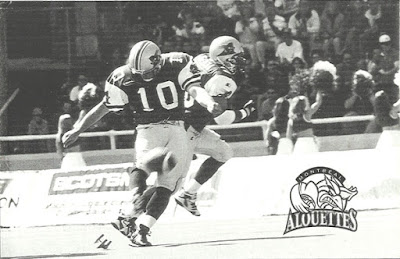 The exact numbers of cards issued and which specific year each issue was produced is uncertain although it is known that as a group they date to the first couple years of the franchise being back in Montreal : 1996-1997. Why these cards would have been produced in archaic B&W in the mid-nineties is unknown but perhaps with the uncertainty of moving the franchise all costs were carefully managed and this would have been the cheaper option, At least the normal team ephemera like tickets and schedules were printed in colour.

These were difficult years for the team as attendance in the Big O - Olympic stadium was sporadic at best. As fate would have it the scheduling of a U2 concert conflicted with one of the team's games and they were forced to move to Molson Stadium in the downtown core. The location proved so superior to the cavernous dome that the Alouettes permanently relocated to the even older but much more atmospheric and centrally located facility. The change of venue was prominently noted on team ephemera from 1998 onwards. 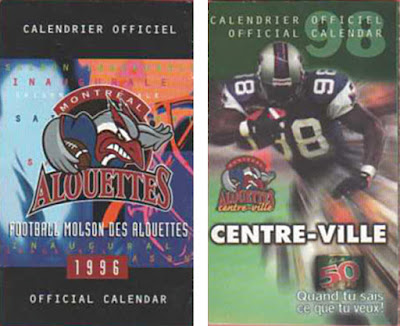 The location change was a primary contributing factor to the subsequent embracing of the team by the city's fans and their eventual on-field success culminating in three more Grey Cup championships from 2002-2010. But it all started in glorious grayscale.