You're Set! You're Safe! You're Sure!

I have often wondered why specifically Canadian football themed advertising pieces are so hard to come by. Considering the popularity of the sport in the major Canadian cities one would have expected that quite often football would have been used to help sell name-brand products. And while this type of ephemera was typically utterly disposable, vintage signs and advertising is a really popular category for collectors and therefore antique dealers as well, so there should be some pieces unearthed from time to time. 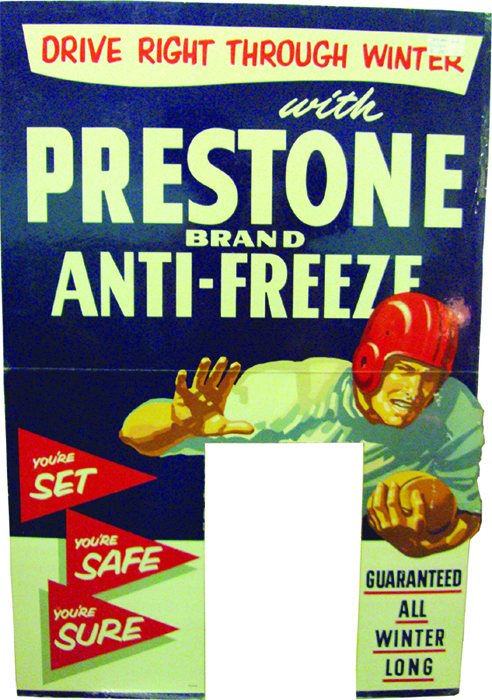 Well a few years back rummaging around an antique mall I stumbled upon just such a gem of top selling product advertising combined with glorious vintage period football graphics as illustrated above. Industry leader Prestone Anti-freeze produced this stunning thick cardboard advertising board with a very fifties-ish football player steaming towards you, about to straight arm you in your facemask-less face. So far so good and a beautiful piece regardless, but as it was a totally generic player...the big question was...is it Canadian?

Luckily the answer was at hand with the existence of a second package of goodies including the original mailing cardboard box showing that the ephemera was the work of National Carbon Limited of Toronto and stamped and postmarked in Canada...Bingo. 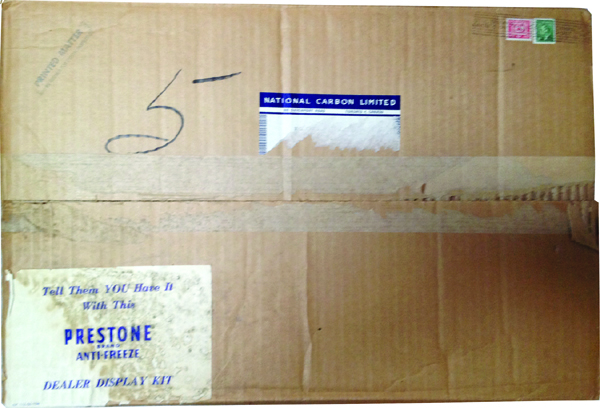 As you can see the package was a dealer display kit to drive Prestone Sales and what a bunch of cool football related items it contained. Besides the main poster there was one thin stock medium poster and two thin stock small posters with the pennant design and one thin stock medium poster with an equally cool fifties quarterback about to unleash a long bomb pass. All of the posters had gummed strips on the front edges as they were designed to stick on the inside of your auto dealership window so customers could see them from the outside (which is why there is some paper lifting and damage on the poster fronts).

The quarterback poster trumpeted the fact that Prestone was sponsoring football broadcasts and this was fully explained in the enclosed "The Touchdowner" magazine. With extensive articles on Anti-freeze as well as how Prestone was promoting the game over a new 16 station network (all cities but Montreal were represented) for the first time in 1952. The magazine is on semi-glossy (not newsprint) paper stock and is eight pages long in total. There are no player images inside but there are images of the broadcasters from each city and plenty of football graphics and stories on the upcoming 1952 season. This item alone is something a vintage Canadian football collector should get excited about! 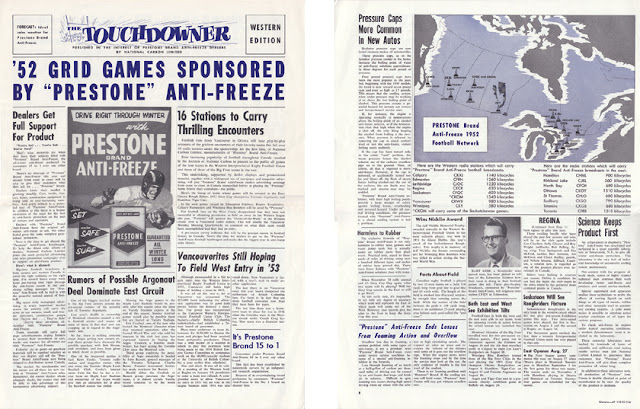 Additionally there were some advertising blanks that the dealer could use to have a ready made Prestone or Prestone + football player advert ordered from local newspapers. And a large colorful poster showed the suggested placement of the promotional items in a typical automotive storefront and the reason for the large cutout in the primary cardboard sign was apparent...Prestone came in rectangular containers in 1952 and you were to slot one into the gap in the sign. 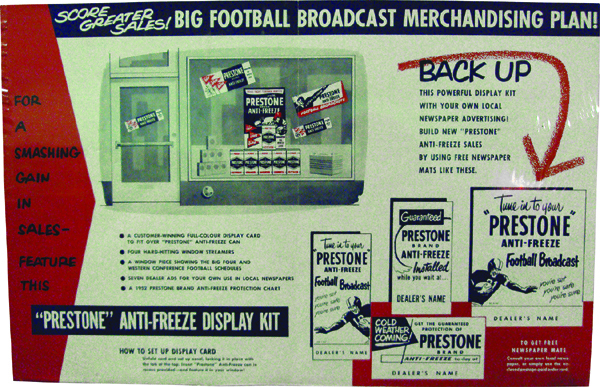 Finally there was a very nice thick cardboard three panel folded 1952 chart detailing all of the specifics on antifreeze protection percentages for various makes and models of cars and trucks of the forties and early fifties. This item has no football reference (it does have the set, safe, sure slogan) but it would undoubtedly be of interest to petroliana collectors on its own. This group of items will all eventually be catalogued in the future planned Volume 4 Collecting Canadian Football - Publications & Ephemera.

I have only seen a few other similar period standalone advertising pieces relating to football that are demonstrably Canadian, and while nice in their own rights, none of them is anywhere near as graphically spectacular, diverse or as intensely football focused as this combination of items. If any readers have examples of other nostalgic Canadian football related advertising items I'd like to hear about them. Merry Christmas and a Happy New Year to anybody reading this!