As most CFL collectors know the 1962 and 1963 Post CFL grocery premium cereal cards are a mainstay of CFL collecting and their popularity seems to remain constant year after year. If you were a kid then, looking forward to the morning meal to see which cards you could eventually cut out of the cereal box back panel, you have had to wait a little over 19,000 days to once again be greeted by CFL players on your morning boxes of Post cereal.


So one day last month I am checking Ebay for CFL items and I come across an auction for the two boxes shown above (with seller's thumb on the left) with these dynamic and attractive CFL players plastered all over the package fronts. Pleasantly surprised I head to the local grocery stores to see if I can locate actual copies for myself.


The players available in the promotion are :


Turns out that by the time I even found out about this promotion it was already over so I was lucky to still be able to find most of the boxes at stores around my area of the city. The website image below shows that Post was promoting the products online fairly well but the CFL might have made a bigger splash on its website or via its mobile Apps because I never heard about it from those channels. 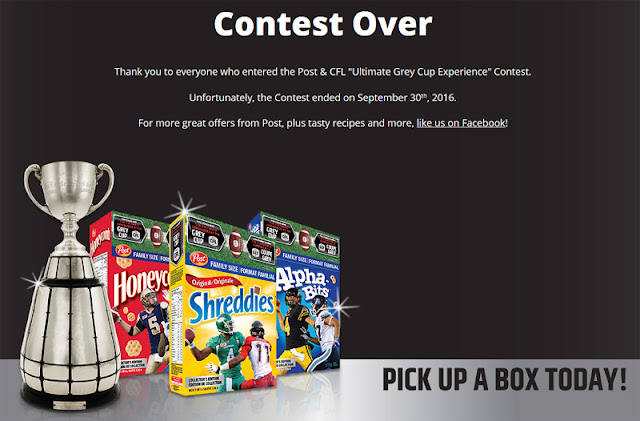 While searching for the boxes, lo and behold I stumbled upon another Post CFL promotion relating to the Jerseys of each CFL club.

This contest is still active and goes until December 31, 2016 and includes discounts at cflshop.ca as well as 250 Jerseys available to be won for each team.

Co-op was the first to produce modern cereal boxes with player images from the start of this decade and these were partially catalogued in Volume II of Collecting Canadian Football. You would think that over the last five decades there would have been a lot of CFL themed material promoted on cereal boxes but other than the classic Post sixties sets, this is generally not really the case. There were a few generic football cards from multi sport sets made available in cereal boxes as well as a few generic football items as prizes in cereal boxes (those will eventually be catalogued in the upcoming Volume III of Collecting Canadian Football).

No doubt there are more vintage unidentified CFL cereal box memorabilia items out there waiting to be discovered, and happily these days some current ones as well. With any luck Post and the CFL will expand on this collaboration in upcoming seasons.
Posted by Andy Malycky at 13:41

Email ThisBlogThis!Share to TwitterShare to FacebookShare to Pinterest
Labels: 2010s