Dairy Queen Serves Up A Winner!

One of the most fondly remembered CFL memorabilia promotions ever, was held over multiple seasons in the mid-seventies by Dairy Queen. Fans could enjoy a tasty soft serve sundae in a football helmet shaped cup and then, with suitable logo stickers affixed to both sides (some with stripe) take the helmet home with them as a keepsake of their favorite team!

The promotion ran for sure in 1976 and 1977 as associated helmet display boards and advertising materials attest to those seasons. It also ran in the U.S. for NFL teams in at least 1976 with the exact same helmets and similar display board. All helmets were identically molded and came with a grey two bar plastic face mask.


The helmets can be considered roughly a 4 - Rare on the availability scale with the display boards and the sticker sheet rating as 5 - Extremely Rare. The sheet shows that the helmets were manufactured in only 6 different colours, both the Argos and Als using blue, both the Bombers and Eskimos using gold and both the Lions and Rough Riders using black. Seven stripes were available as Montreal and Calgary did not feature stripes on their helmets during this time period. As far as is known the sticker sheet was the same in both years. 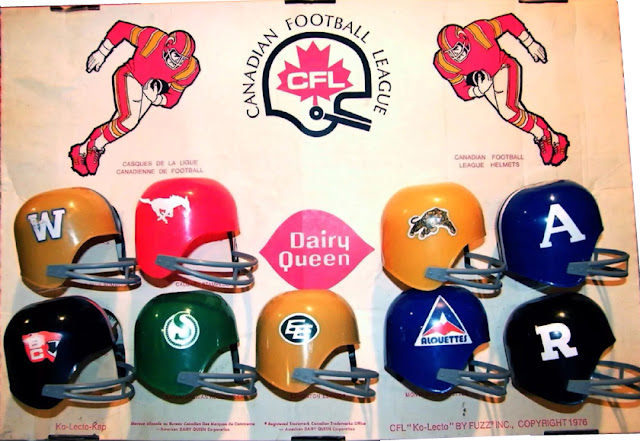 The display board available in 1976 may have only been intended for in Dairy Queen franchise display purposes or it may have been available for fans to take home as well, the answer to this question is not currently known. A 1976 board in prime condition would probably rate in the $75 to $100 range and advertises the promotion as CFL "Ko-Lecto" BY FUZZ INC., whatever that was supposed to mean?

In 1977 the board was upgraded in the graphics department and was designed so that the fan could keep track of the east and west standings by rearranging their helmets in the slots. This board was available for purchase at the DQ locations as per the advertisement shown earlier.


The helmets themselves will range from about $5 for a sloppily stickered one in average shape with some flaws to maybe $12 to $15 for a near mint condition example with well placed stickers and a straight stripe where applicable. The stickers themselves tend to hold up age wise fairly well with good adhesion to the plastic 40 years on more often than not. I actually paid $20 to reacquire a Stampeder helmet (my vintage DQ eaten out of  versions from the mid-seventies having long ago ended up in the landfill) because, well the owner did not want to sell very much and I really wanted it...


Although you can't tell the helmets from different years apart from the outside, inside the copyright information imprinted in the plastic is different in the earlier year versus the later year. A few uncertainties remain, it is not known why the copyright date is 1974, and why the copyright seems to have been settled in Canada first and only later in the US, why the bottom number (both of these are Stampeder red helmets) changed from one year to the next and whether each different colour helmet had a different number.

It is somewhat possible that the items were also produced in 1975 but with no display board (some ebay auctions have claimed that Ko-Lecto was stamped on the inside of their helmets but this remains unconfirmed) and it is certainly unusual that the US NFL promotion did not predate the Canadian one as that is usually the case with these sorts of things. Anyway a set of these helmets is a great reminder of summer treats and gridiron action from four decades ago.

Email ThisBlogThis!Share to TwitterShare to FacebookShare to Pinterest
Labels: Seventies