OK, so now that we have resolved the annual question "How will the Stampeders blow the Grey Cup this year?" - Answer : In never-happened-before-in-104-years, setting-multiple-all-time-distance-of-play-going-against-you-records, carve-your-franchise-name-in-stone-as-the-greatest-CFL-choke-artists-ever fashion.

You knew it was going to happen, you didn't know who or how or when or what, but sure enough when the opportunity presented itself to literally give the game and the championship away to an opponent they had thoroughly dominated almost all night long, they did exactly that in a way that makes snatching defeat from the jaws of victory a brutal understatement. And then having somehow miraculously managed to put themselves back in the position to at least tie the game, they decide to piss it all away again on a low percentage, risky, unnecessary, under thrown long pass to a five foot nothing receiver who was not open and was double covered. Brilliant...

And related to the theme this month's post will look at the popular collectible category of CFL Grey Cup tickets.


Grey Cup tickets are not particularly rare (although obviously the older they are the fewer have survived) with examples from the sixties onward being relatively easy to accumulate if a collector was to put their mind to it.

Obviously the better the condition of the ticket, and whether or not the stub had been torn off has a significant effect on the price, with a NRMT vintage ticket probably being at least 2 to 3 times more valuable than an EX+ ticket with missing stub.

From 1970 to at least 1978 the tickets used almost the exact same design every year making that decade probably the least interesting era of championship ticket.

Of course if you search out this material you will eventually come across other ephemera related to the game but not specifically a game ticket, such as the Manitoba Lottery ticket below.


By the mid eighties tickets had started to feature regular photographic images and foil stamping or holographic effects. Some tickets from some eighties championship games were undersold and there are plenty of unused items on the market so they are only worth a few dollars per ticket. 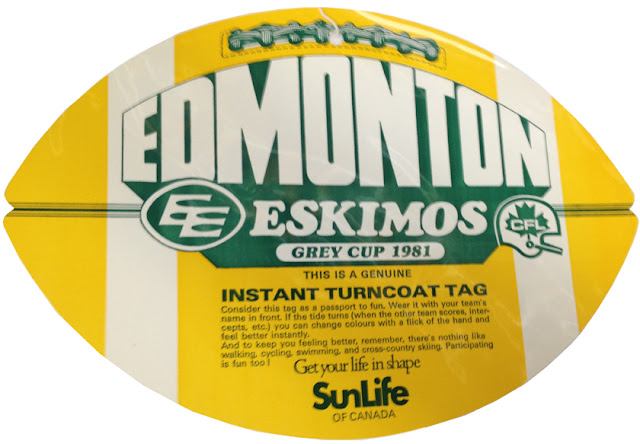 Turn of the decade into the last years of the century and Grey Cup tickets start to get larger and as you might expect have incrementally higher face values.


Despite the glossy nature of the premium commemorative tickets it is still possible to find more mundane objects related to the game as shown below.

In 2012 for the 100th Anniversary of the Grey Cup game, the league issued 4 different tickets with four legendary Grey Cup winners on them and they look to have been printed on plastic with holes for stringing onto a lanyard.


So there you have it, there are no shortage of Grey Cup themed tickets and associated bits of ephemera to collect that will likely bring back great memories of games and titles won by your favorite team in decades past. Just so long as you do not have the gut wrenching misfortune to be a Stampeders fan.