Union Rules Plot the History of the Game

While records are meant to be broken, rules are evidently meant to constantly evolve and to ultimately transform an adopted sport into something uniquely specific to Canada. When English immigrants began to play British sports, including rugby in Canada in the 1860's, inevitably local changes to the rules gradually crept in. This process resulted in three distinct games; Association Football (soccer), British Rugby and "rugby with local Canadian rules" or what eventually came to be called Canadian Football being established. 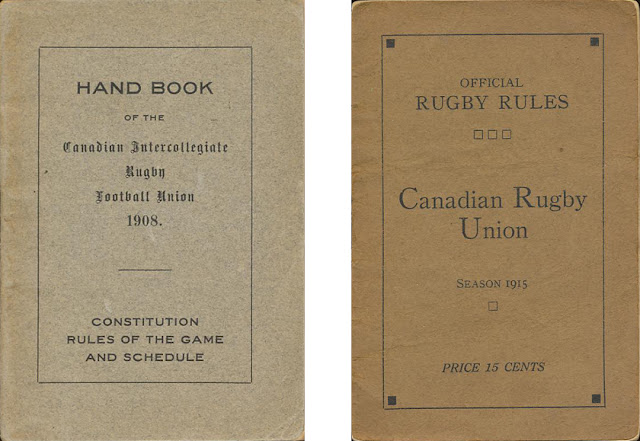 Initially the latter of these three sports, which was for decades interchangeably called just Rugby, Rugby Football or Canadian Football, was split among competing Unions with their own specific rules codifications (one of the first apparently being issued by the Canadian Rugby Football Union in the early 1880's). 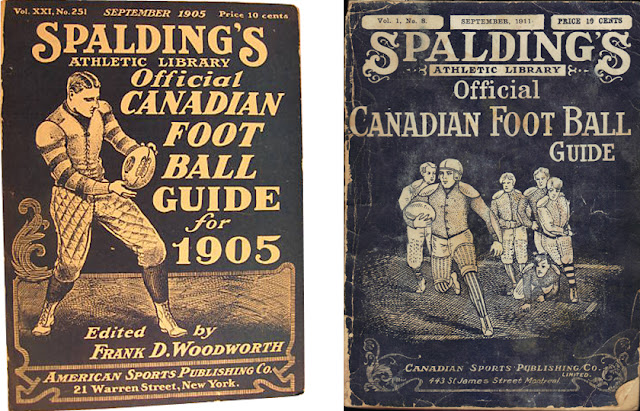 The well known Spalding's sporting good company issued a large series of guides covering many sports over many years and most likely used the designation Canadian Football to differentiate the sport from the other popular Football games (for which they no doubt had separate volumes). 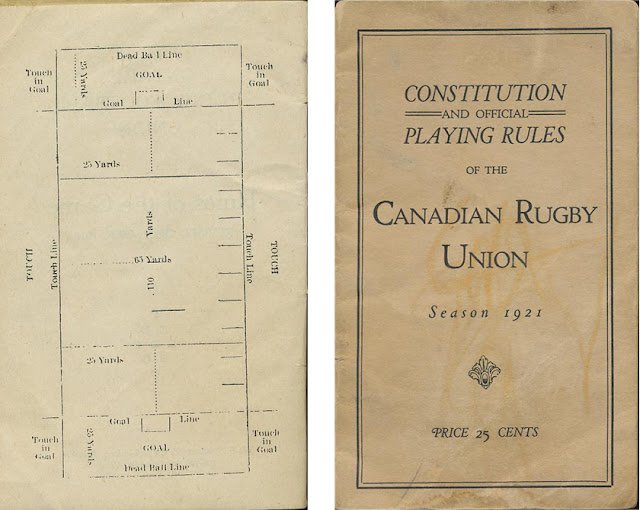 Gradually as all of the unions were merged under the oversight of the Canadian Rugby Union the rules were standardized. The field diagram above is from the 1918 Ontario Rugby Football Union rules book and illustrates the standard size of 110 yards with two 25 yard endzones by 65 yards wide. These dimensions remained in force for around 100 years until facility limitations instigated a shortening of the endzones to 20 yards each, or less in some American stadiums in the nineties. 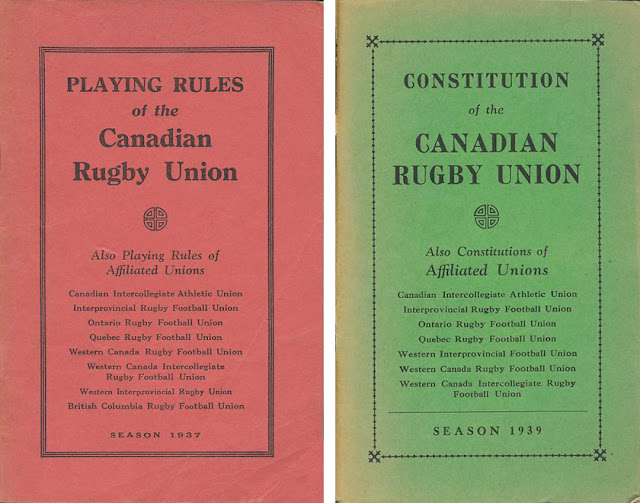 Once the majority of the unions were affiliated with the C.R.U. the standard rules and constitutions were issued during the twenties, thirties and forties in colorful booklets like those shown above. These yearly resources are the best historical source available for charting the history of all of the various (confusingly overlapping) organizations that governed the sport across Canada, and their constituent teams. 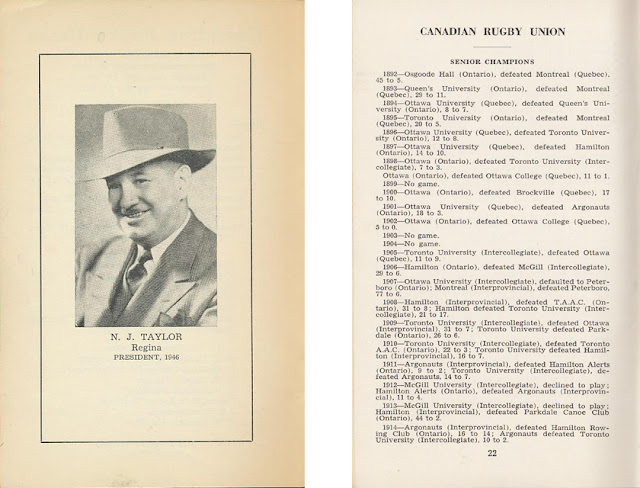 While these publications might not be considered the most compelling Canadian football collectibles, there is no denying their historical importance. Usually only one photograph was in each guide (N.J. "Piffles" Taylor of Taylor Field fame graced the 1946 edition) but many of these gentlemen were Hall of Fame member builders of the sport. The booklets also contain many very hard to find obscure trophy winners and championship team results. Where else could you find out that the Saskatoon Saskawins went to back to back Gillespie Trophy Western Junior championships, winning in 1922 but losing in 1923? 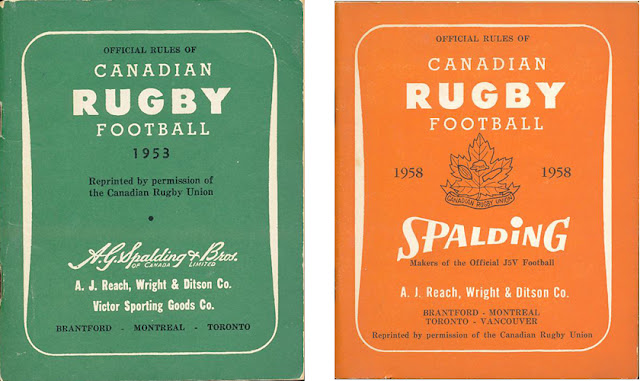 \
Several years ago the estate of Gord Walker (Hall of Fame football reporter who initiated proper statistical record keeping in the east in 1954 and was first president of the Football Reporters of Canada in 1958) was auctioned off on Ebay.  A lot of the material I am illustrating here came from Gord's meticulous collection, although the CFL Hall of Fame probably also has the majority of it in their archives. From roughly 1949 through to 1958 Spalding sponsored the official rule books in the updated format displayed above, sometimes with a nifty C.R.U. logo with a football, a beaver and a mystery shape. 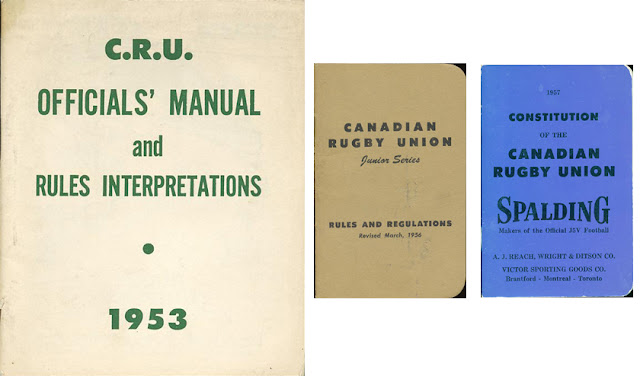 Besides the standard rules volumes there were many other associated publications in different sizes and formats made available to help officials execute their duties on the playing fields. Some unions or organizations also published their own specific guides for many years as well during this era. Once again obscure historical information, such as the existence of the Sir Winston Churchill Trophy awarded to the Senior Intercollegiate Champions since 1953, can be ascertained from certain booklets by interested researchers. 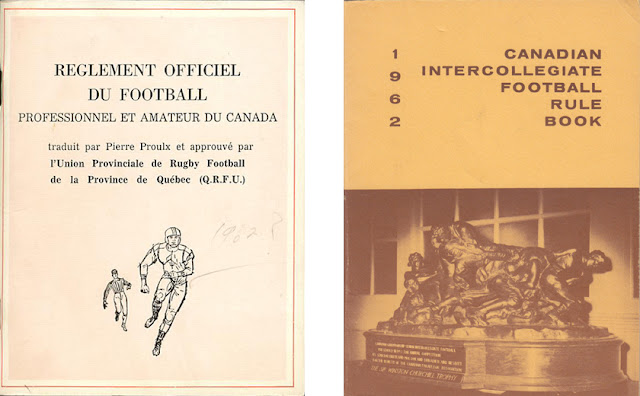 In some cases rules for official versions of the game that no longer exist can be found, as well as rules on how to properly track the play result statistics of the games. The "Manual On Statistics" is distinct from the actual yearly statistical and official records compilations that comprise a different sub category of Publications and Ephemera related to Canadian Football. 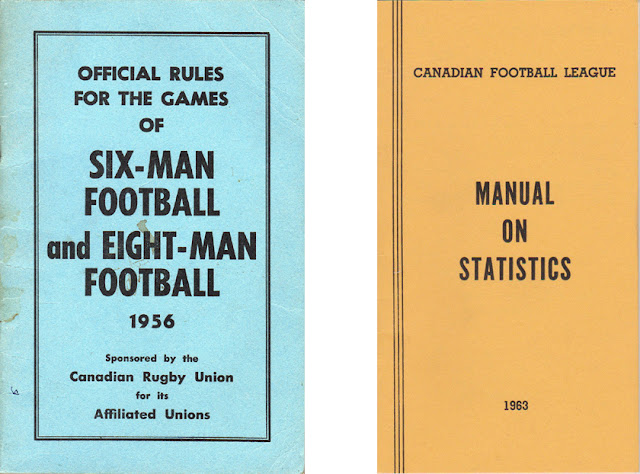 Such was Jackie Parker's influence on the league in the 1950's that he is the only player known to have ever been featured on the rule book cover in 1959. Spalding also took the opportunity to feature him on their current sporting goods catalog in 1958-59 along with a hockey player who was just a generic drawing. 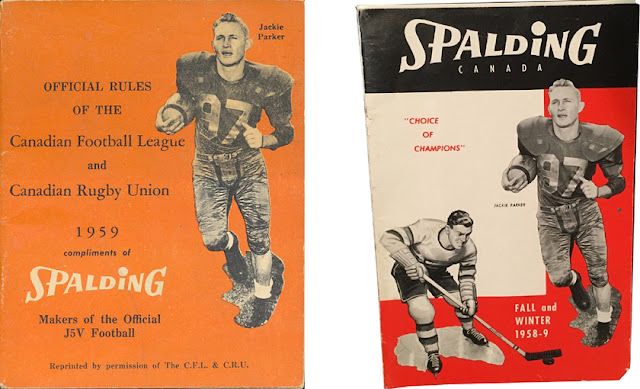 Also in 1959 the Canadian Football League finally gets a mention on the rule book cover. The league was technically constituted in 1958 but the reality is that the history of the individual franchises is intertwined with the history of the various unions and can be traced just about as far back as the earliest origins of the game! 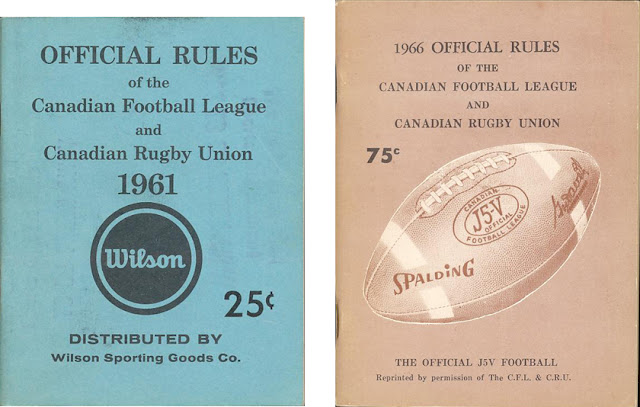 Wilson Sporting Goods somehow managed to grab the sponsorship rights for at least one season in the early sixties but by 1962 through 1966 Spalding was back in their customary position on the guide covers. 1966 was also the final year where the old CRU results were included in the guide so it was your last chance to impress your friends at parties by relating that the old Ontario Fort William Redskins (of the Western Interprovincial Football Union!) lost the Intermediate final in 1953, 1955, 1956, & 1957 before finally winning it all in 1958 and that the poor Port Arthur Mustangs never even got a title game sniff. 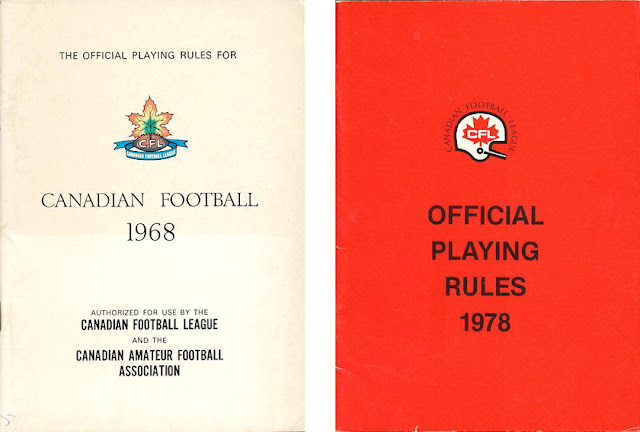 The booklet format changed again in 1967, the same year that the C.R.U. officially became the Canadian Amateur Football Association (subsequently branded as Football Canada in 1986). Presumably these rule books continued to be issued as separate publications until 1985, after which from 1986 forwards the rules were incorporated as a section of the CFL's Facts Figure and Records annual guides.

These fascinating relics are just another example that shows that you can approach collecting Canadian Football historical materials from many different angles that span almost 160 years of competition.