Recently a question was asked on the blog about the Flip series of CFL football cloth dolls and since I had a huge amount of information and images on these (almost all thanks to advanced collector Joe Gill) waiting to be compiled into a post, here it is.

The product was naturally originally issued as NFL dolls (and advertised as AFL as well) in 1960 and there are a number of variations and oddities relating to those items but of course this post is going to just deal with CFL specifics. The CFL themed dolls were most likely initially issued the following season.

What I am designating Type I dolls are easily distinguishable by numerous features. If the football patch is still on the doll it has stitches at top and the city and team name are used. There are circular protrusions on the sides of the helmets and no team logos or insignia. Some of the helmets feature a center stripe that is painted on the flat surface.

The face has a significant indented profile, the mouth is black and the iris is at the 10:30 position of the pupil. The chin strap is white and the buckle is on the left side of the head. The fingers are detailed and the thumb on the left hand is bent. The pants are a corduroy style of fabric and the feet face forward.

Type I dolls were apparently packaged in the same boxes used for the American dolls and were likely produced and distributed from Kansas City where Columbia Toy Products was based. These dolls came with a strip of vinyl numbers so you could personalize your doll. At the present time it is unknown if any of the Type I dolls ever came with garment tags that should have indicated manufacture in the USA.


Subsequently in 1962 a Type II Flip Doll was issued. Differences with the Type I dolls are easy to spot. Only team names (no city, except to differentiate Ottawa and Saskatchewan Riders) are on the football patches. There are circular indentations on the sides of the much more rounded shaped helmets with a raised molded center helmet stripe. Some teams have their 1962 helmet design features, such as the horseshoe for Calgary, the lightning bolts for Winnipeg & Ottawa, the wings for Montreal and so forth.

The face has a a flatter profile, the mouth is red and the iris is at the 12:00 position of the pupil. The chin strap is brown and the buckle is on the right side of the head. The fingers are less detailed and the thumb on the left hand is not bent. The pants are a canvas style of fabric and the feet face forward.

Production of Type II dolls was shifted to Canada where the product is known to have been available in Mondrich Sales and Allied Toy specific boxes (with the Mondrich likely considerably more common), both companies based in Toronto. The vinyl numbers were no longer offered and dolls are known to have been issued with blue tags (Mondrich) and white tags (Allied) but perhaps most frequently can also be found with no tags at all.

Evidence that the toys were issued in 1962 comes in the form of the official 1962 Grey Cup Kickoff by Prime Minister John Diefenbaker. Standing to the left is Miss Grey Cup (Miss Ottawa Rough Rider) from 1962, Renata Pikelis and she is holding a Type II Ottawa Flip doll. The Mondrich Sales box has a series of referee calls illustrated on the back including No Yards bottom left affirming that this was a Canadian football specific product. 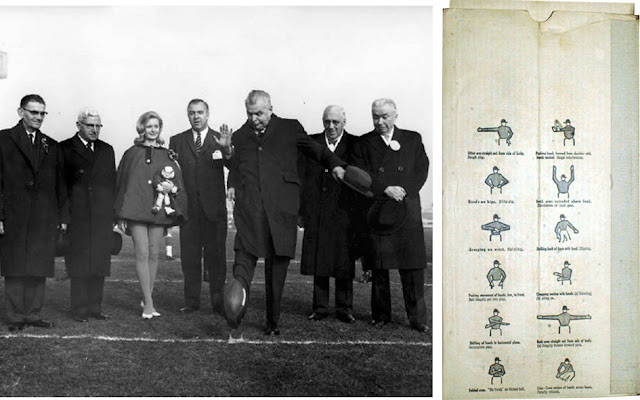 The probably much rarer Allied Toy box does not have anything printed on the box back but the doll inside in this case is a Type II.

Mondrich apparently used A. T. & C. Novelty Co. for manufacturing, whereas Allied did their own manufacturing.


A third variant designated Type III has also been identified, and these were known to have been issued by Mondrich (at least) and probably represent a second production run after the first run was fully distributed. In the absence of any other information these are also considered to have been issued in 1962.

Type III can be differentiated from Type II by the eyes which have a larger pupil and the iris is at 2:00,  by the feet which face outwards instead of forwards and some minor dimensional differences in the legs. Type III dolls are also 9" wide at the shoulders while Types I & II are 8" wide.


Here are some comparison pictures of all three Types of dolls.


The box for Type I indicates that the dolls were 17 1/2" tall, but they are actually only 16" tall (all three Types, I believe). Also they are probably stuffed with different material because Type I dolls weigh 16 ounces, Type II dolls weigh 18 ounces, and Type III dolls weigh 24 ounces.

At least one promotional doll is known, this one produced by Allied for Carling breweries which was involved with the CFL for many years. The doll is likely a lot rarer than the regular team dolls and looks to be a Type II.

Additionally there are some dolls that are purported to be CFL that have the fuzzy jersey material used for the legs instead of the canvas cloth. Above is a doll signed by Bud Grant and claimed to be Winnipeg, but without the cloth football emblem on the front (or evidence of a Canadian made tag) it can't be definitively classified as such. Therefore I have not identified the fuzzy leg dolls as a distinctive Type IV.

They (I have also seen one presented as Hamilton, without the football emblem) may just be versions of the generic dolls issued in the USA or they could represent the factories using up the last of their material at the end of a production run. Boxed and preferably tagged dolls would need to surface in order to confirm whether the fuzzy legged specimens are actually Canadian or not.

One thing is for sure, putting together a complete set of Flip, Your Personal Football Hero dolls of either mixed or identical Types would be a flipping formidable undertaking.