Strictly Amateur ... Or so they say

The general historical consensus is that Canadian football became "Professional" in a gradual fashion only after World War II so that by 1950 the transition had been fully made from amateur to paid players. Prior to the war we are led to believe that maintaining the amateur status of the players was paramount and that no compensation was paid for on field actions, and yet a recent bundle of ephemera I have acquired seems to indicate that there was certainly plenty of grey area when it came to attracting top talent to a team.

To set the scene, I am talking about the Calgary Tigers of 1929 and the recruiting efforts that the team's management made to scoop the Regina Roughriders (1928 Western Champions and Grey Cup contenders) Quarterback Fritz Sandstrom away to play in Calgary. The initial contact came via letter on April 25th, 1929 inquiring as to whether Sandstrom might be open to the move. 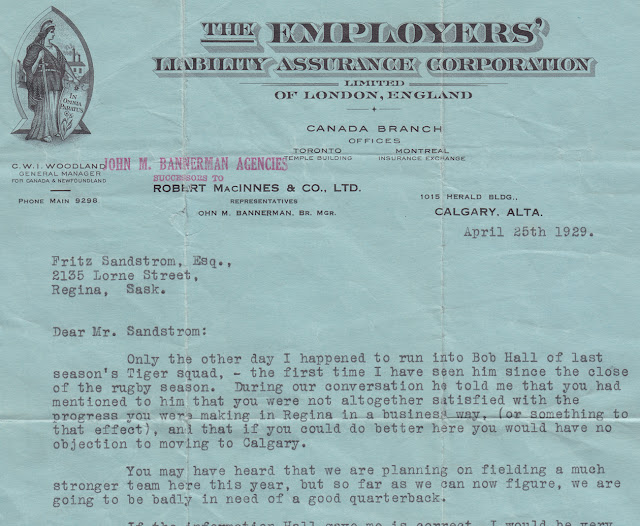 From the correspondence it would appear that John (Jack) M. Bannerman was the Tigers manager during this time period, and I believe he later went on to be the President of the Canadian Rugby Union for a season (the position rotated around the country). In fact the Bannerman Insurance company still exists and has been affiliated with Calgary football throughout the decades and still advertises on Stampeder radio broadcasts to this day.

Fritz Sandstrom played for Regina from 1921-24 and 1926-28 according to cflapedia and there is no mention of him suiting up for the Tigers but this is because records from this time are spotty at best and unless somebody makes the effort to chronicle all of the player participation for a team (as somebody has done for the early Riders) then the information is lacking. Luckily Darryl Slade of Calgary has come to the rescue with scans from his virtually impossible to obtain Calgary Tiger programs from that era that confirm the success of Bannerman's efforts.

Sandstrom was likely injured two weeks later when the team again played the Eskimos at Hillhurst Park as he does not appear in the game lineup. The Tigers finished first in the Alberta Rugby Union that year ending a five year drought (and starting a five year Alberta championship run) but eventually fell to a still tough Roughriders in the Inter Union Playoffs 15-8. Sandstrom did play in that game in Regina and was bitterly derided by the local fans for "defecting" to the west, some things never change...

Jump to the following season and it seems that Sandstrom was once again back in Regina because a new campaign to entice him back to "the big city" began that spring with a letter dated May 7, 1930.
The team was now more organized in coordinating the placement of players with important local businesses and Bannerman is confident a better off-field arrangement can be made than the one that perhaps was not particularly satisfactory for Sandstrom the previous year.


By the next letter of May 30th an agreement appears to have been arrived at and more discussion of potential employment placements takes place.

This (unsigned) contract from July 30th seems to fly directly in the face of the existing amateur rules as it is between the Calgary Tiger Rugby Club and Sandstrom and although it indicates he is under no obligation to play for the team (wink, wink), it is the team that has guaranteed his salary and bonus if he cannot be placed in a suitable position elsewhere! 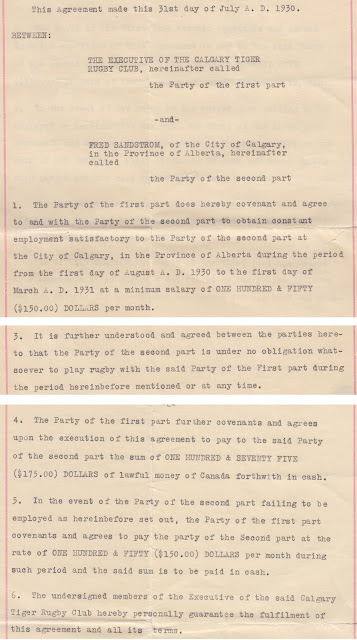 Sandstrom did play for the Tiger's again in 1930 but injuries continued to limit his ability to contribute. The Tigers would again win the Alberta Union Championship and fall 9-6 to Regina in the playoffs.

In 1931 the Tigers, perennially short on funds, became associated with the Altomah Athletic Association and were known as the Altomah-Tigers and eventually as just the Altomah (Indians) and Fritz Sandstrom was now the coach. This telegram from Rider manager Fred Wilson implies that perhaps the Tiger/Altomah's questionable practices had caught up with them in terms of the amateur code...

By 1932 it is unclear whether or not Sandstrom was still involved with the team but since team executives were still writing him with extensive details about their financial issues and fundraising plans he may well have been. In any case Sandstrom returned to play the final two years of his career with the Regina Roughriders from 1933-34.

Amazingly a random ebay pickup has shone considerable light on much of the behind the scenes machinations involving teams that are almost completely forgotten today. The documents highlighted here clearly show that at the very least there was a definite aspect of semi-professionalism (defined as the receiving of some tangible benefits other than explicit payment for athletic services) that was alive and well in pre-war Canadian football.

Posted by Andy Malycky at 13:36 No comments: