There is no shortage of weird and sometimes wonderful Canadian football collectibles that run the gamut from "somewhat unusual" to "what possible reason was there to produce this?". This blog post will examine a random selection of these curious items. 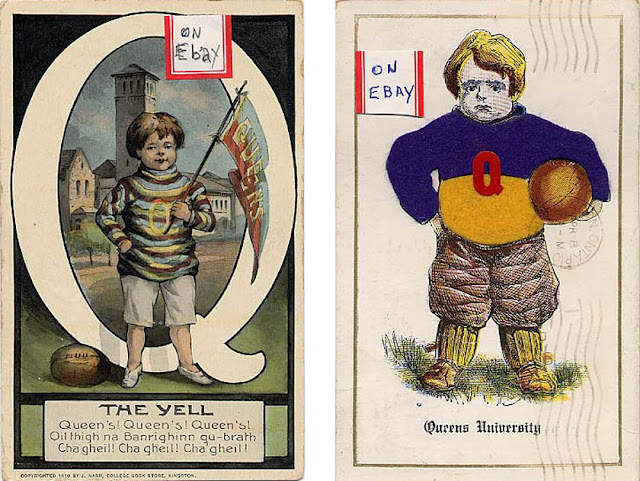 First up are two circa 1910 Queen's University Rugby-Football postcards (as seen on ebay, obviously). What struck me as somewhat unusual (or at least unique with regards to Canadian football) about the card on the left was the Gaelic chorus of the School song called "Queen's College Colours", which translates to "The college of the wife of the King forever" and ending three times with the Gaelic war-cry "No Surrender". Apparently still sung after every Queen's touchdown today. Also notable is the incredible bruising menace exuded by the cherubic Queen's student athlete ...  shudder.

The above two cloth patches designed to be sewn onto a garment were discovered with a group of other, definitely CFL, memorabilia and look to be of late 1940's vintage. The very curious thing about the patch on the right is the inclusion of the American flag along with what looks like some version of the pre-1965 Canadian (or maybe Ontario?) flag and the Big-Four notation. 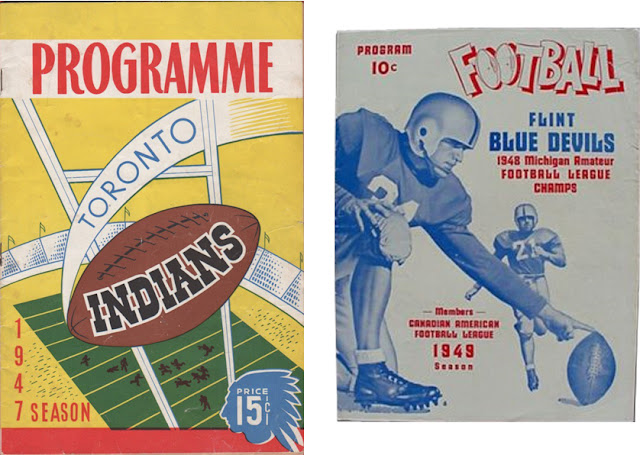 So the tilted ball and the Indian head logo are reminiscent of the team patch, but not particularly conclusive. The Toronto Indians began play in the O.R.F.U as the Toronto Oakwood (a Toronto neighborhood) Indians in 1941 & 1942, dropped the Oakwood from 1943 to 1947, merged with Toronto Balmy Beach to form Toronto Beaches-Indians in 1948 and then Beaches reverted to Toronto Balmy Beach in 1949. So maybe that was the end of the Indians, or maybe not.

About that same time period we have an amateur program from the Canadian American Football League of 1949, and I have never seen anything else regarding this league anywhere (some things are not even discernible with google!). Is it possible that the remnants of the Indians actually continued play as an amateur team in this cross border league? That would fit the patches above and the dual flag motif, but where would the Big-Four fit into that scenario? Its a mystery. 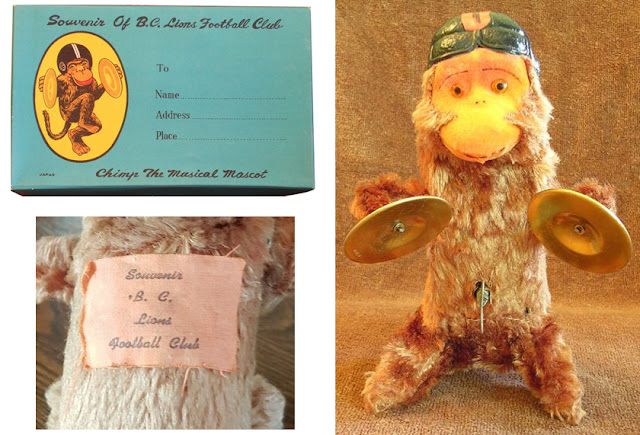 Well there isn't anything that I can think of that does not absolutely scream the B.C. Lions Football Club more so than "Chimp The Musical Mascot" wind-up symbol crashing monkey. Era? : Late 1950's probably - Why? : unanswerable.  If you've seen Toy Story 3 you know that these monkey toys were generally seen as malevolent although this fellow looks a lot friendlier in person than the monkey on the box. His body is also a fair bit more gopher like than actual monkey, but so long as he's a Lions fan I guess that's OK.

Some enterprising Prince George civic businessmen probably decided to commemorate the 1958 Grey Cup Parade with these wood token dollars even though the parade and the game were held over 300 miles away in Vancouver. Apparently there is so much excess white spruce there that wooden trade dollars were made in many different years with different themes. Be careful not to trip and fall into that Rocky Mountain Trench though. If anything it showed the nation wide scope of the game in those days, the excitement wasn't just limited to the big cities that had the franchises.

Now here is something unique that most dedicated Ti-Cat fans would probably want to have in their collection. The Shittley Award was an (obviously) unofficial player award given to the team's biggest Shit beginning in 1958 and running for at least 6 years after that. The award was an enameled chamber pot with the winner getting his own version (with his nicknames on the reverse side) for the specific year, plus a handled version that recorded the annual winners for posterity.

While this was a joke for the players in the Tiger-Cat locker room during an era when they dominated the Eastern Division, this type of one of a kind memorabilia with direct provenance to the players themselves is not something you can come across every day. And keep in mind that four of the six biggest Shits were actually Hall of Fame caliber Shits too. Delightful. 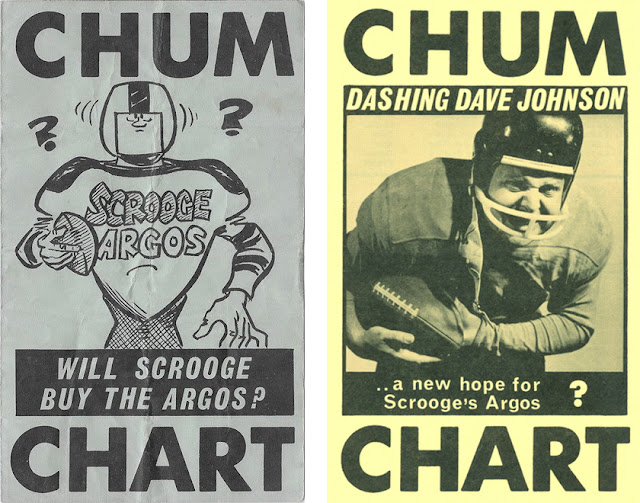 CHUM was a Top 40 radio station in Toronto (still exists today) and like many radio stations they printed a weekly folding pamphlet with a theme on the cover and the Top 40 songs and other advertisements on the insides and back cover. For some reason in September 1965 they were very concerned with what looked like a potential purchase of the Argos by a new owner, whom they do not identify but presumably he was something of a tightwad to have been branded Scrooge.

The item on the left came up on ebay but there is not one shred of information on the rest of the pamphlet panels about why this is on the cover. A little research led me to a site replicating all of the CHUM pamphlets where it became evident that there were a number of them with a CFL theme (Dave Johnson was a station DJ, not a football player). Now a quick glance at some of my reference material did not uncover any attempted or completed purchase of the Argos during this time period (John Bassett Sr. being the owner) so what these were all about is anybody's guess. Cool though. 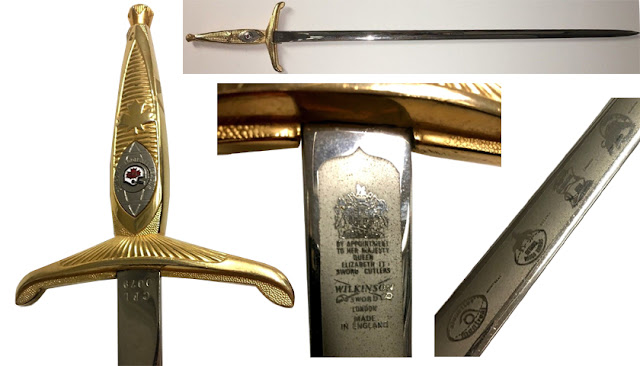 One of the best known "WTF" items produced for the CFL was the Wilkinson Sword commemorative CFL actual plated steel sword, issued in the early 1970's. Why an English Sword manufacturer (who admittedly were in the habit of making special commemorative swords) was chosen to create a precision crafted, serial numbered ceremonial weapon with the CFL franchise logos engraved upon it for the league, is something of an enigma.

It is believed that somewhere around 300 of the swords were made, and I had heard that perhaps Calgary's GM Rogers Lehew had a hand in getting the project executed (although I can't confirm that). In any case the swords are scarce, make an impressive centerpiece of an advanced CFL collection and are very pricey these days. I don't know what they cost when issued but if you care to drop over $2,500 Canadian the one pictured above is on ebay right now.  . 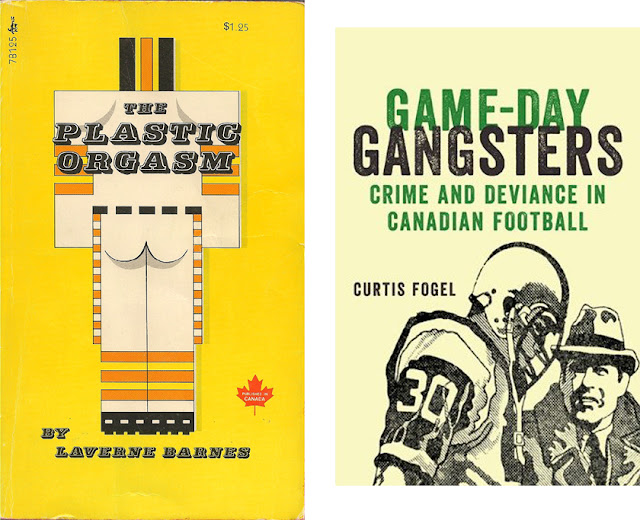 When it comes to the CFL bookshelf the books shown are definitely two of the more unconventional volumes chronicling the game. Laverne Barnes was the wife of B.C. Lion Emery Barnes and her fairly well known book was an expose of the league revolving around the sex, drugs and violence that surrounded the players primarily in the sixties, I believe. The book is fairly easy to acquire although there are a number of different formats and covers (first issued in 1971) and the paperback shown above is probably one of the rarer versions.

The ominously titled Game-Day Gangsters is much more recent from 2014 and discusses the aspects of organized violence in football as well as hazing and performance enhancing drugs. It is actually available as a free PDF download too. As I have read neither of these books I can't assess their contents but they certainly address the sport from a different perspective than most authors. 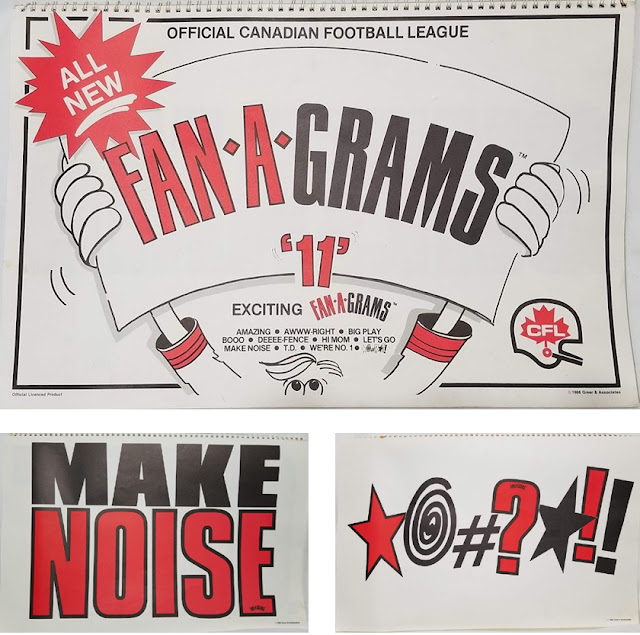 Now here was an absolutely fabulous idea from 1986 : Fan - A - Grams. Why cheer or curse in the stands during a game when you could instead hold up one of these nifty signs that said it all for you? All New and officially sanctioned by the league too! how could this not be a fantastic success.

Well, I guess based on the fact that this item is about as rare as any I have ever seen from the decade of the 1980's, it probably was somewhat underwhelming in the sales department. Presumably the most common people holding up the expletive sign shown bottom right were whoever put up the money to print this turd product. 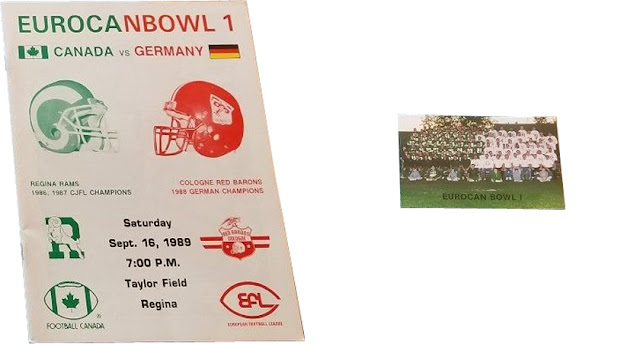 Finally with the league currently pursuing a 2.0 strategy that would see partnerships with obscure (American) football leagues in countries other than the United States, this last pair of item seems somewhat prophetic now. Who knew that in 1989 the Regina Rams Junior team were already participating in the first (& only?) Eurocanbowl against the German Champions of the European Football League. A very low resolution image of a postcard featuring the members of both teams wraps up this post.

Posted by Andy Malycky at 22:06 No comments: