In order to launch a digital version of the Collecting Canadian Football series of guides, information regarding newly issued sets and single items covering the full decade+ (2010 - 2021) for league wide issues, and most of a decade (2013 - 2021) for team specific issues have to be added. In addition all newly discovered older sets and single items for either scope need to also be added to the system. And finally when there were changes to already catalogued sets those also need to be updated to match the latest available information. So there is a lot of data to process.

Here I will illustrate a few of the interesting changes to already listed Ottawa Rough Rider sets as this will give a general idea of what sorts of updates can be required across all of the existing data, and some numbers that will hopefully convey some of the extent of the new info that will be available once the digital version goes live.

First up there is some clarification of a fairly well-known issue of Ottawa Rough Rider photographs and printed pictures that were issued in 1950 and 1951 respectively. These are fairly easy to come by considering their age and the reason is that the promotion to distribute them was very successful and thousands were sent out to fans for the asking. 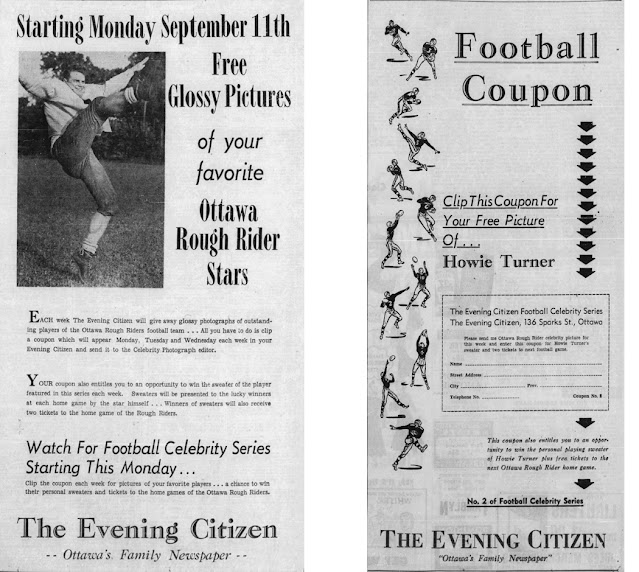 The Evening Citizen (later the Ottawa Citizen) ran this promotion to distribute pictures of Rough Rider stars starting in September and for every home game. The fans would have to look for the specific coupon, fill it out and send it in and the lucky draw winner would win tickets to the game AND the jersey off of the back of the player featured that week, hand delivered by the player after the game! 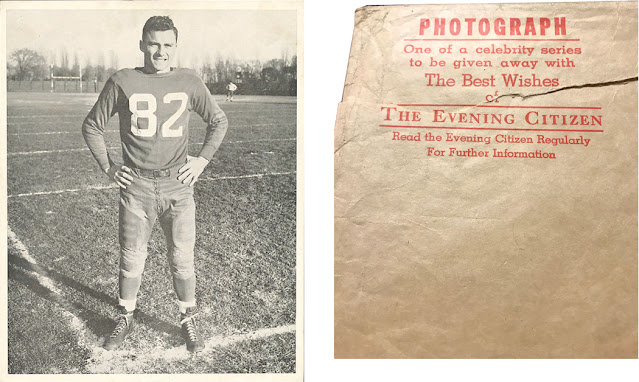 Pictured above is the Howie Turner photo from week #2 in 1950 and the envelope that the pictures were mailed out in to the fans. Besides the football pictures the Citizen also produced pictures of Hockey players and celebrities of the day (like Roy Rogers).
A previously separately catalogued team picture of the 1950 Riders it turns out was also part of this promotion. Late in the year fans were advised they could also have it for free but they had to pick it up in person at the newspaper's offices. So it has now been moved to this listing as a promotional item. 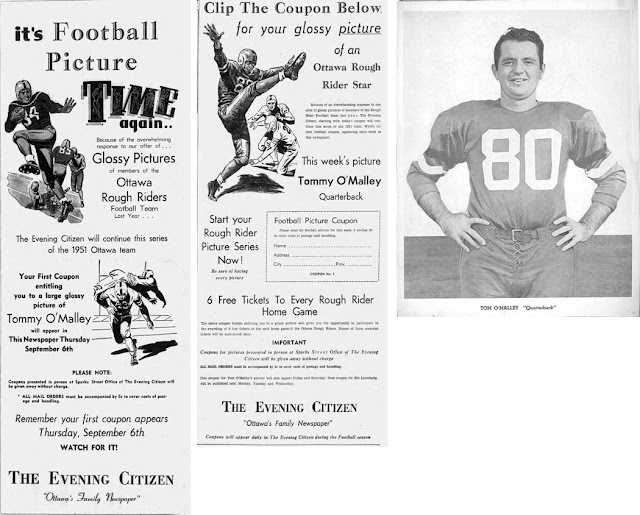 When 1951 rolled around the Citizen was at it again, this year with a set of printed pictures that once again required the fans to clip the specific coupon and send it in, this year covering the mailing costs as well. The prize was changes to 6 tickets to the football game and no jersey. Different graphic illustrations were used from week to week for the various coupons. Thanks to Bobby Burrell for the tip off of the mailing envelope which led to all of these details. 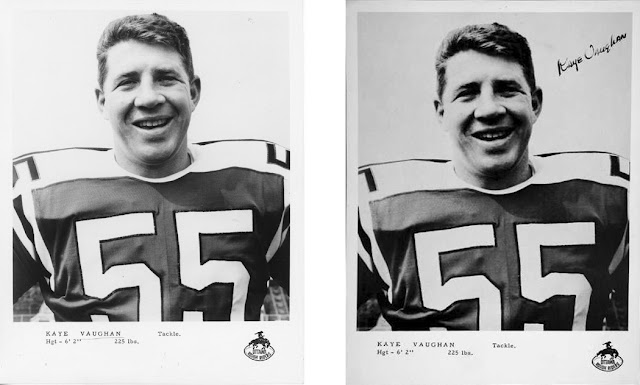 When it came to the early 1960's Rough Rider team issued Action and Portrait photographs a considerable number had been catalogued, but specifications of exact year of issue were then (and remain now) unavailable. What was known is that some of these Action and a couple of these Portrait photos were used for the 1961 British American service station printed picture giveaway promotion. Shown above are the Portrait Kay Vaughn team issued photo and the B/A printed picture using the same image. 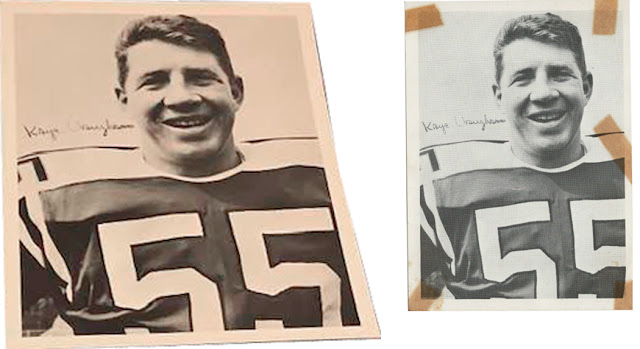 But additionally it was determined that some of these photos were also made available available in 8" X 10" printed picture format without the bottom identifying info or team logo and in 5" X 7" cardstock format. Which means that for some players 4 different variations of the same image were made available during this time period. Note however that there are slight cropping differences in each of the four items above.

One of the better known Ottawa Rough Rider team issue sets is the 1967 Rideau Trust set that features three players to each panel. The Rideau Trust corporate logo typically appears below each player on the panel. What was probably a test print sheet has surfaced where there is only one logo per panel under the middle player normally, but on the far right for the coaches card. Of course if somebody was to cut the individual players from such a panel, only the two end fragments would then be different from the regularly issued panel cut fragments. 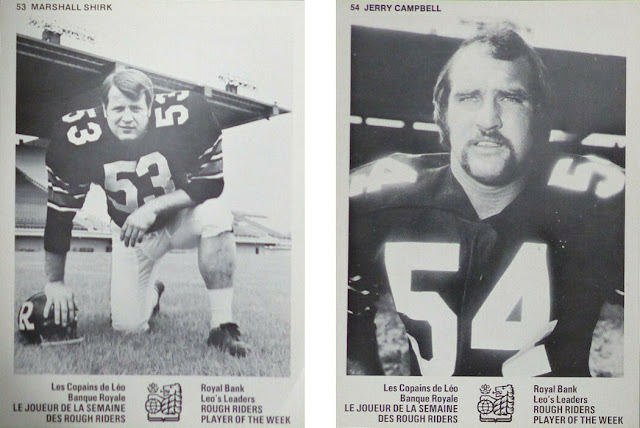 The Royal bank had B&W cards of Ottawa Rough Riders available one per week at their branches for their customers to take for free. The original listing of 1971 had 11 cards identified but another 12 cards have been discovered, bringing the total known to 23. Because that is a lot of cards this listing has been modified to 1971 - 1972 as there were likely 12 cards per season but the format is identical so they are all still grouped together. One unidentified card is probably still out there somewhere.

So that is a good cross-section of some of the types of updates that needed to be processed, which affects the total number of items listed, the set total prices, sometimes new associated items and new images that need to be sized and placed properly for the system to have access to them.

Now for some numbers. Unfortunately the process of trying to catalogue a gazillion things issued in an unending array of different manners results in unavoidable complexity. As a refresher on what these distinctions mean :

Base - The normal listing of a Set, Series (1 item per year over multiple years) or Single item

Variant - A set wide variation such as parallels or French versions

Format - The same items in a different physical configuration, such as Post panels

As you can see there are as many new listings as there were original listings, part of this is attributable to the fact the a year's worth of Upper Deck resolves into between 15 and 20 different types of sets, Jogo puts out 3 to 4 sets of Alumni cards each year, and so forth. In some cases with formats and variants the listings are just more explicit than were originally captured in the first volume.

This information is complete, except by the time this whole exercise is done Upper Deck & Jogo will have issued more 2021 cards and those will need to be accounted for.

Now to present the same information for the Team Specific Issues is a problem because we get the matrix above for each team and that gets messy in a two dimensional presentation. So to make it a little easier to comprehend I will leave out the Unchanged numbers which in total are Base = 1051, Variant = 85, Format = 20.

The green numbers are done and the red portions have yet to be done, so while a great deal of progress has been made there remains still a fair bit of work to do, although the USA teams will be minimal and the OTHER is mostly for pre-WWII teams and generic football items that might be postponed until a later time. A change generally means that there are more items discovered than were originally listed for a set or sometimes new additional items have been added. Once again a lot of the variant and format changes and new listings here are from more explicit treatment of the season ticket sets.

Finally what was originally going to be a print Volume III (and still might be one day) will also be included as a work in progress so some categories of items (Games, Coins, Pennants, Stickers/Decals) have significant content. With much more to come as time permits once the system is launched.

All told there are about 2,600 separate Set/Series/Single listings, each of which has related representational images, average about 6 per listing counting thumbnails = over 15,000 pictures that need to be converted to the right format, sized appropriately, named properly and put in the correct final location, for the system to work. This applies to unchanged set listings, as well as new set listings, so that image work still needs to be done for the Volume III sets.

On top of that anytime you take 6 months to update content, when you get back to the technical side of things Google and Apple will have changed terms and conditions for Apps on you and probably made things that you did before illegal now in their never ending quest to make using their platforms as difficult as humanly possible. So technical changes and then final testing comes after all the listings are done.

Now, that is a lot of numbers to digest, what good do they do and why would any collector care? The answer is that identifying the changes and additions made allows for those that are familiar with the printed guides, to use an option (for subscribers) to search with a flag where you can specify just show you the changed sets, or just show you the new sets. Then you can easily browse the results to get a handle on the information that is value added from the old printed catalogues.

If you were wondering why this promised digital version of the catalogue never seems to become a reality, this post explains why that is. Target date is still sometime this year.

Email ThisBlogThis!Share to TwitterShare to FacebookShare to Pinterest
Labels: Ottawa